In the event you need immediate legal assistance after or outside of normal business hours, here is a list of our attorneys who can assist you.

MICHAEL NAPIER Founded the Law Offices of Napier, Coury, and Baillie, P.C. and has been representing Phoenix Police Officers for over 39 years. Mr. Napier is one of the most experienced labor and personal injury attorneys in Arizona. Mr. Napier has represented hundreds of officers before administrative bodies throughout Arizona, and has assisted critically injured officers as well as survivors of officers in obtaining compensation for their injuries and losses. 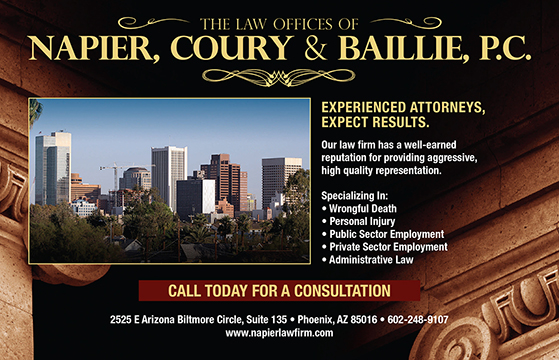 Additional Members of the Legal Team

ANTHONY COURY is a third-generation Arizonan who graduated twice from the University of Notre Dame, first with a Bachelor of Arts degree in 1993 and then with a Juris Doctorate in 1997.  He also holds a Masters Degree in Business Administration from the University of San Diego.  Mr. Coury has focused his 16 years of practice primarily on personal injury and wrongful death lawsuits in which he has served as plaintiffs counsel. He has experience in cases dealing with dram shop liability, negligence, governmental claims, and product liability including service as counsel on the litigation team for now retired Phoenix Police Officer Jason Schechterle.

KATHRYN BAILLIE was born and reared in Phoenix Arizona, completing her undergraduate degree at Arizona State University. She served as a J.A. for the Third Circuit Court and then worked as a Public Defender in the Commonwealth of Kentucky before joining the Law Office of Michael Napier P.C. She has worked with Mr. Napier on personal injury and wrongful death cases, dram shop liability, negligence, administrative, disciplinary, and other employment matters.

ERIC REGINALD WILSON was born in Austin, Texas, but raised in Omaha, Nebraska, Mr. Wilson earned his Bachelor Science degree from the university of Nebraska-Lincoln and his Juris Doctorate from the University of Denver Sturm College of Law.  Mr. Wilson has successfully represented numerous clients before the Phoenix Civil Service Board and provided legal consultation to the firm’s clients on an array of issues.

In addition to the full services provided to PLEA members to protect their careers, the Law Office of Napier, Coury, and Baillie, P.C. provides the following:

Personal Injury Recovery (on or off duty), experienced representation at a reduced fee; Reduced Fees for matters not covered by the PLEA legal plan;

Free Probate of officers estate for line of duty death; Free consultations to members on any matter, and Referrals to attorneys or specialists for matters not handled by the firm.

In the event you need legal assistance after normal business hours, on weekends, or holidays, you may call (623) 293-8980.

Protective Orders: What to Know, What to Do

Our office has recently seen several local judges misunderstand federal and state laws regarding protective orders. As a result, officers’ rights to carry firearms and ammunition have been wrongfully revoked. The City of Phoenix recently put an officer subject to an erroneous firearms restriction on unpaid administrative leave and informed him that he had 60 days to rectify the situation or he would be terminated. Please don’t let this happen to you.

Background
Arizona courts have the power to prohibit the possession of firearms as a means of enforcing an order of protection relating to domestic violence. See A.R.S. § 13-3602(A). In order to restrict gun rights, the court must specifically find the defendant to be a credible threat to the physical safety of the plaintiff. This didn’t stop one recent superior court judge, who failed to make the appropriate finding, but still put the officer on the Brady list, jeopardizing his career.

In 1968, the Gun Control Act was passed by Congress and signed into law by the president. This act prohibited certain people from possessing firearms and ammunition. These types of people include drug users, illegal aliens and individuals deemed a credible threat to their intimate partners (i.e., spouse, former spouse, etc.).

A special exemption, however, was carved out for members of the armed forces and law enforcement agencies. See 18 U.S.C. § 925(a)(1). That provision allows members of the armed services and law enforcement agencies (i.e., not civilians), who might otherwise be prohibited from carrying firearms, to do so in connection with their public responsibilities.

In Summary
A court is allowed to confiscate your firearms and ammunition if you are deemed a credible threat to the safety of a spouse, former spouse, etc. Despite a firearms restriction, you should be able to carry your gun on duty because of the law enforcement exemption found in § 925(a)(1). If you have been criminally convicted of domestic violence, however, you will lose your gun rights forever.

Although this sounds simple, please don’t navigate these situations by yourselves. Getting an attorney involved immediately is the safest way to ensure that the court applies the state and federal laws correctly.

The Defense of Dan Lovelace

Chandler police officer Dan Lovelace responded to a priority one call, forged prescription in progress, on October 11, 2001 at approximately 3 p.m. in the afternoon. He was the first officer to arrive at the scene on his motorcycle and he parked his bike in front of Ms. Nelson who was in the outside drive-thru bay of a Walgreen’s pharmacy (Officer Lovelace could tell that Ms. Nelson was engaged in conversation with the pharmacist and felt that parking his bike in front and blocking her was not unsafe at that moment).

He approached Ms. Nelson and politely asked for identification. She said she had none, although her purse was clearly visible in the seat. He then told her his purpose and said that he thought that this matter would be cleared up shortly, but that he noticed that her license plate was down as he approached her car (clearly giving him more information that she was involved in this crime). He asked that she remove the keys from her car, place them on the dash, which she did. He then went to the back of the car to put her license plate up. As he did so and was calling in the plate number, and began walking back toward the driver’s side in the empty bay, Ms. Nelson put the keys in the ignition, and started her car.

Officer Lovelace ran to the front of the median, i.e., the forward left fender of her car and ordered her to cease this activity. She then moved forward and he again continued his police commands. She then ran into his bike and took a sharp left turn into Officer Lovelace, leaving approximately 29 feet of skid. Officer Lovelace believed he was being compressed between the building and the planter and unfortunately decided he had to shoot to stop this lethal threat. He aimed for center mass and fired. Ms. Nelson was killed almost instantly and her car decelerated to approximately 5 miles an hour where Officer Marty Thompson’s vehicle came in contact with it, fully stopping it.

Officer Lovelace raced after the car and called in “shot fired, roll medics, one shot to the chest”. Then Officer Lovelace opened the door to remove Ms. Nelson to perform CPR, he noticed that his shot had not entered her chest but actually had entered slightly to the rear of her upper left arm.Maricopa County Attorney, Rick Romley, came to the hasty conclusion that this was a “bad shoot” and hired an outside ballistics expert. This expert was given misinformation and came to the erroneous conclusion that Officer Lovelace could not have fired the shot as he had relayed it. (Officer Lovelace had given a thorough taped interview on the evening of October 11, 2001 and had conducted a taped walk-through with investigators.)

Mr. Romley went to the grand jury, obtained an indictment and arrested Officer Lovelace. An hour or so later he held a full press conference telling the public of what a fabulous job he had done for this community.Fortunately for Officer Lovelace, he was a member of the Chandler Law Enforcement Association, which had an agreement with the Legal Defense Fund to defend officers accused of crimes while on duty. LDF retained our office to represent Officer Lovelace. Our first tactic was to point out to the Judge what a slanted/faulty job the prosecution had done in presenting their case to the grand jury. The trial court agreed and remanded the case, ordering that the county attorney hold a second grand jury investigation. The county attorney did so and the second grand jury refused to indict.

Mr. Romley was not satisfied with that conclusion and filed direct information with the trial court, again charging Officer Lovelace with second-degree murder. A jury trial was commenced in May of 2004 and a verdict was rendered on July 9, 2004 acquitting Officer Lovelace of second-degree murder and the lesser-included offense that the prosecution had requested of manslaughter. He was also acquitted of endangerment as Ms. Nelson had her 18?month?old son in the backseat of her car.

To mount this defense, the Legal Defense Fund authorized our office to hire the necessary experts. Without them a viable defense would have been virtually impossible. We were allowed to hire and have testify at trial the following experts:Dr. Elizabeth Loftus, a world-renown expert on eye witness testimony and memory. Dr. Loftus has written numerous books and articles on the fallibility of memory for over 30 years.Dr. Vincent DiMaio, the chief medical examiner of Bexar County, San Antonio, Texas and the author of Gunshot Wounds, the bible in that area. Dr. William Lewinski, an expert in biomechanics and a behavioral scientist that focuses on police performance in lethal force encounters. Dr. Paul Michel, a forensic optometrist providing expert opinions and legal testimony regarding human vision.Tim Pebler, an accident re-constructionists. A former Arizona Highway Patrolman who had left the patrol to attend engineering school and then devote the rest of his caner to accident re-construction. Mike Bumcrot, a retired Los Angeles Sheriffs detective who has investigated over 100 officer involved shootings and has 34 years of police service, 22 in the homicide bureau. Jan Spaeth, a jury consultant expert who was able to allow us to conduct jury focus groups and to help injury selection. Atheia Hardt, a media consultant.

The jury deliberated for 2 and 3 / 4 days before reaching their unanimous verdict. In addition, the two alternate jurors let us know that they also would have voted not guilty. The atmosphere in police shootings is becoming more and more hostile. Clearly this case had political overtones. The high publicity makes it even more difficult to defend as the media typically takes a slant against the officer. The prosecution tried to take a situation that developed in seconds and then analyze in detail why things went “wrong”. As U.S. Supreme Court Justice Oliver Wendell Holmes stated 63 years ago: ” Detached reflection cannot be demanded in the presence of an uplifted knife.” This was a hard fought victory and without the help and support of LDF, the outcome may well have been different.