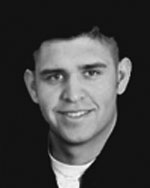 At approximately 8:30 pm, Officer Cortez responded to a call that a man and woman were passing forged checks at a check-cashing business on 83rd Avenue, near Encanto Boulevard. Officer Cortez entered the business and was placing the male suspect in handcuffs when he drew a gun and shot Officer Cortez several times. Officer Cortez was rushed to St. Joseph’s Hospital where he died from his injuries. The suspects fled the scene, but were apprehended the next day. They were charged with capital first-degree murder, burglary and forgery.