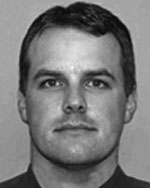 Officer Nick Erfle was shot after he and his partner approached three people for jaywalking and obstructing traffic on 24th Street, one block north of Thomas Road. One man gave a fictitious name that had a misdemeanor warrant and as they attempted to take him into custody, the suspect drew a weapon and shot Officer Erfle in the face. He was rushed to Banner Good Samaritan Medical Center where he died from his injuries an hour later. The suspect then carjacked a vehicle and took the driver hostage. About an hour later, an unmarked special assignments unit spotted a car and suspect matching the carjacked vehicle’s description. They began surveillance and managed to box in the vehicle at 27th Avenue and McDowell Road. The suspect pointed his gun at the hostage and he was shot and killed by an officer.