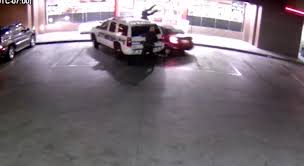 On September 13, 2016, Phoenix Police Officers Ryan Hoffrichter and Jeremy Pyles had just finished taking care of a vulnerable adult call at the QuikTrip located at 2535 West Camelback Road when their Supervisor, Sergeant Anthony Pankowski, arrived to follow up with them on the call and meet Officer Pyles, who was working his first shift with the squad after successfully completing Field Training.

While they were in the middle of a conversation in front of the store standing next to a fully marked Phoenix Police Department Tahoe, Marc Payne, who unbeknownst to them was backed into a parking space, suddenly pulled out of the parking space, drove around the pump island and accelerated towards them in his vehicle at a high rate of speed.

Sergeant Pankowski tried to get out of the way and was struck by the Payne, breaking his leg, which left him lying on the pavement unable to assist other than by clearing on the radio for more units. Officer Pyle was hit and catapulted into the air by the impact, while Officer Hoffrichter was able to get out of the way and took immediate action to get Payne into custody. Despite colliding with the Tahoe, Payne fought with Officer Hoffrichter. Although he was seriously injured, Officer Pyle was able to assist Officer Hoffrichter and eventually deployed his Taser on Payne. With the assistance of arriving officers, Payne was taken into custody and later booked into the 4th Avenue Jail on multiple felony charges. This incident made national headlines due to the graphic video of the sudden and violent attack captured on surveillance cameras.

Officer Hoffrichter suffered minor injuries and returned to full duty, as did Sergeant Pankowski who also had torn ligaments and tendons in his ankles, however, Officer Pyles, who suffered a severe concussion, along with injuries to his back, hips, and legs, has yet to return to full duty.

Payne plead guilty to the following charges on April 19, 2019:

On June 4, 2019 Payne’s sentencing hearing was held in Maricopa County Superior Cour before the Honorable William R. Wingard, where Deputy County Attorney April Sponsel represented the State. Officers Hoffrichter and Pyles were present with their families as was Sergeant Pankowski along with a show of support from a large group of Phoenix Police Officers. PLEA was also in attendance.

Officer Hoffrichter described Payne’s attack as “calculated and callous” “beyond reprehensible” and resulted in “hell for me and my family. While Officer Pyles told Payne “I forgive you” he said forgiveness “does not diminish what he has done” and his actions were a “purposeful and evil choice” which caused “havoc and pain in our lives.” Sergeant Pankowski said they were attacked only because of “the color of their skin and uniforms” due to Payne’s “terroristic ideology” and they were all “physically and emotionally impacted” by his actions.

The recommendation was for Payne to be sentenced to 52 years in prison and he ultimately received 35 years, so he will not be a threat to our officers or the community for quite some time.

PLEA will always provide a voice for and stand behind our members and their families when they are victims of criminal suspects’ acts of violence.