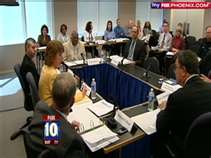 Below are comments made by PLEA President Mark Spencer on April 11, 2011, to the panel convened by the city to review the kidnapping numbers.

The Phoenix Law Enforcement Association (PLEA) represents over 2300 rank-and-file Phoenix Police Officers and Detectives.  As far back as June 2008, PLEA relied upon Phoenix Police Management’s kidnapping number of 359 (now 358) when addressing the problem of illegal immigration and its negative impact on our members.  Late 2008, early 2009 Arizona Republic Reporter Mike Ferraresi communicated with the PLEA office that he had done a hard count of the HIKE numbers and had only found around 60 border related kidnapping numbers.  Since PLEA did not have access to the reports that Mr. Ferraresi did, our confidence in management’s kidnapping numbers remained undaunted.  In June 2009 PLEA representatives met with Senator John McCain in his Washington DC office – two months after PPD had submitted for federal monies through two grants.  In addressing our efforts seeking federal assistance with our border and policing issues, Senator McCain informed us if a problem could be tied to illegal immigration it would facilitate the federal government to invest in solving the problem.

In summary, a “border related kidnapping” is defined as 1.) border related (tied to illegal immigration), 2.) unique to Phoenix, 3.) involving hostage/ransom/rescue, 4.) sophisticated criminal groups, and 5.) manpower intensive.  The City Manager’s office made it clear in several written communications what was NOT included in this list of kidnappings – reports that were written for information only or involved domestic violence or sexually motivated events.  As an important side note, every sexual assault contains elements of a kidnapping as well as armed robberies and custodial interference.  It would clearly fall outside of the running definition of “border related kidnapping” to include these types of reports to substantiate or rectify the problem presented by PPD management.

At the end of the summer in 2009, PLEA was advised through police personnel that there was problem with kidnapping figures.

In October 2010 City Councilman Sal DiCiccio as well as Judicial Watch received a list containing the now 358 “border related kidnappings” that were presented to Congress and the community.  PLEA subsequently read through all the reports that were provided through a public records request (there are still approximately 80 out of the 358 we haven’t received).  Our analysis fueled by our police experience in investigating crimes and producing reports indicated that 75% or the reports were not border related.  The amount that Mr. Ferrarsi had discovered appeared to be accurate.

There seems to be a strong current and clear insinuation in PPD management’s explanation to the kidnapping panel and/or the public that the problem with the inaccurate number of 358 lies with either “cops” or “computers.”  To infer that the HIKE squad did something wrong or that patrol officers mislabeled reports is outrageous.  To blame the software system when statistical personnel warned of disingenuous results is just as unacceptable.  PLEA believes the problem does not lie with cops or computers but with a flawed conscience of some in upper level police management.