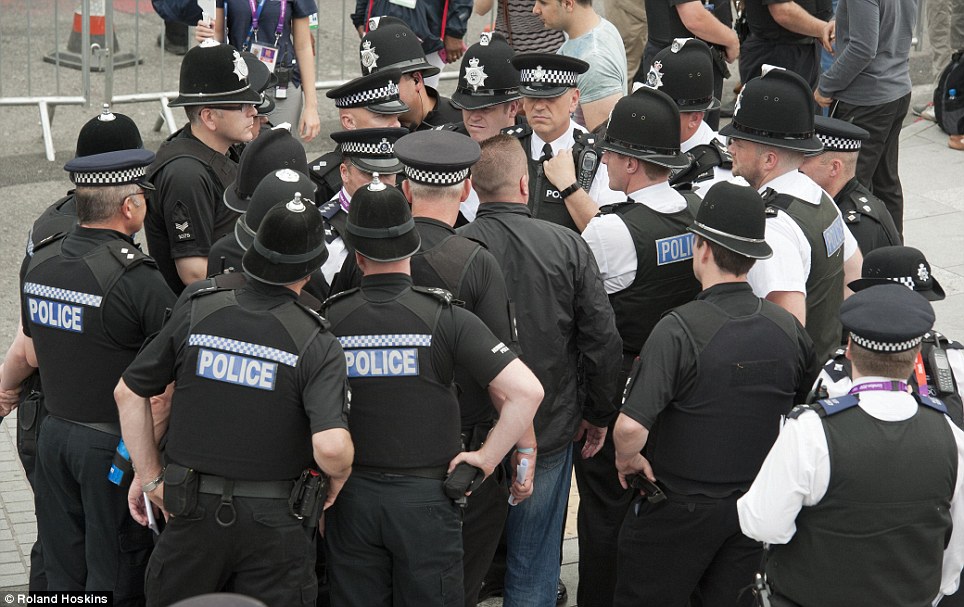 NOPE….SOME OF LONDON’S FINEST IN CLASS D’S
ON THE WORLD STAGE AT THE 2012 OLYMPICS.

On Friday, August 03, 2012, PLEA met with Chief Garcia to discuss the Class D uniform issue.  The following persons were present at the meeting.

PLEA’s position: PLEA is in full support of the Class D uniform and sees no reason to abolish an existing uniform system only to have officers purchase a slightly different type of utility uniform.  Class D’s are a proven time tested utility uniform that has been in use at the Phoenix PD for 15 years and there is no realistic justification to replace the existing Class D uniform or to reinvent the wheel. PLEA also stated that decisions of this magnitude, that impact the majority of the Phoenix Police Department’s sworn, should be done with prudence and consideration over a years period of time.  PLEA expressed a desire to put a hold on the Class D uniform issue until such time as both parties could engage in meaningful dialog on the topic between labor and management.

Discussion:
The Chief had met with PPSLA the day prior to discuss the Class D uniform.  PLEA asked the Chief what the driving force was to replace Class D’s. The Chief re-iterated many of the same reasons that were put forth in the ENS that was published on July 16th.  Specifically:

The Chief also argued that he believed the Class D has a strong military look about it and is too easy to duplicate.  PLEA countered this argument by showing computer printouts from various websites showing the ease with which uniform items to include Class C type items, could be purchased online to include metal badges and shoulder patches proving that any type of uniform is easily duplicated.

PLEA President Joe Clure explained portions of the meet and confer ordinance and MOU articles pertaining to the uniform committee and the labor management committee.  President Joe Clure explained the process of how we obtained the Class D and the fact that it came out of a joint Labor/Management agreement in 1998 and that part of the agreement was the mandatory wearing of the vest with the Class D.

Joe made it clear that in this instance the Chief didn’t have the unilateral authority to remove or replace the uniform.  The Chief was advised that he must first meet with the certified bargaining unit for Unit 4 members (PLEA) and negotiate an agreement that is mutually acceptable to both sides.  We also explained that getting rid of or changing the uniform was not a time sensitive issue and therefore the issue could be placed on hold to prudently and with due dilligence review all options and solutions prior to engaging in a significant change with major financial implications for Unit 4 members.

PLEA expressed concerns with the failure to bring us into the discussion on an issue of such magnitude prior to making a decision.  When asked why he didn’t meet with us prior to making the decision, his response/rationale was that he knew by sending the ENS out it would “create dialog.”

PLEA explained that we felt the Chief had been disingenuous with us as well as to officers in patrol briefings, with regard to him downplaying the impending uniform changes.  We also told him numerous officers felt insulted by the reasons given in the ENS for abolishing the Class D. The Chief explained that part of the reason for the rapid decision was that he wanted the change to coincide with and occur before uniform checks went out and wanted officers to be able to spend their money wisely.

After a point in time in the discussion the Chief’s answers seemed to fall into one of three responses:

Prior to the end of the meeting the Chief complained about “people” going behind his back to those in city government.  When asked by PLEA if he was referring to PLEA speaking to the City Manager on issues, he became evasive.  When he continued to complain on the issue, Joe Clure, Ken Crane and Will Buividas attempted to elicit specifics from the Chief.  In fact, the Chief refused to provide details and resorted to the standard line of: “Well if you don’t know I’m not going to tell you.”

The next step:
The PLEA Board members in attendance at the meeting were extremely disappointed in the attitude displayed by Chief Garcia and his unwillingness to reconsider his prior decision which we believe to be ill-informed and ill-conceived, without prudence or consideration for the negative impact such a decsion would have on the rank and file of the department.  PLEA believes that the Class D uniform decision is a topic of mandatory bargaining.    The PLEA Board’s perception of the attitude communicated by the Chief was that of “My way or the highway.”

At present, it appears that the Chief’s idea of the meet and confer process is a faulty belief where a plan is implemented and then there is minimal to no dialog with the labor group which would only occur after the fact.

PLEA will be moving forward with multiple grievances on the Class D issue and is also exploring additional avenues of redress.  If you feel you have a grievance on the Class D uniform email PLEA Grievance Chair Ken Crane at kcrane@azplea.com and provide the following: first and last name, ser no., contact ph no., squad designator, Sgt’s first and last name and the reason for the grievance such as monetary loss, medical issues, or one year wear out period.