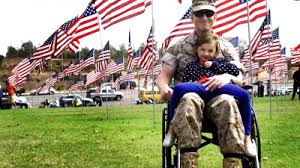 Several years ago 27 year old Marine Staff Sergeant James Carey was wounded during a training exercise which rendered him blind and confined to a wheel chair.  He can only see light shadows and has a goal of walking again one day.  In the past few years, fellow Marines from Camp Pendleton have come together to keep his spirits up and keep him focused on his recovery.  They have done this by assisting him in competing in three full marathons where teams of dedicated volunteers have pushed his wheelchair for the full 26.2 miles.

In July of 2014, James relocated to live with family in the Phoenix area and is planning on competing in the Phoenix Marathon on February 28th (SSGT Carey will be participating in the Half-Marathon event).  Since James is new to Phoenix he is calling upon supporters in the Phoenix area to make his dream of completing this race come true.  Friends of James reached out to the Phoenix Law Enforcement Association to see if Phoenix officers would be interested in supporting this noble cause.  Those who would like to participate as a part of the team to support Staff Sgt. Carey in the completion of this mission should call the PLEA office at 602-246-7869 in order to get their contact info registered as a part of the relay support team.

The Half-Marathon race begins Feb 28, 2015 at 0630 hrs out in the East Valley.  Start point for the race is just west of the intersection of Greenfield and McDowell Rd. in Mesa.

CLICK HERE for a map of the complete race route.

CLICK HERE for a copy of the event flyer