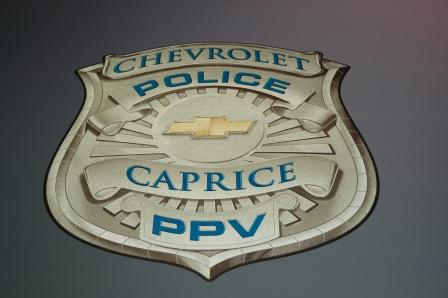 This full size, rear wheel drive vehicle is claimed to be purpose built for law enforcement use and is based on an existing design manufactured by GM Holden Limited, an Australian based wholly owned subsidiary of General Motors.  It has a 355 horsepower Flex Fuel, 6 liter, V8 engine, coupled to a six speed automatic transmission with a Sport mode for performance, and has a limited slip differential.

In addition to a static display vehicle, which we were allowed to walk around, try out, and sit in, we viewed promotional Power Points and video testimonials.  Afterwards, we had the opportunity to drive the vehicle on two courses.  The performance course was set up to allow us to test acceleration, full braking, tight turns, evasive action, and included a slalom section.  The larger street course allowed higher speeds, sweeping and tight turns to simulate a pursuit in an urban environment including freeways and city streets.  Participants were able to take two runs on each of the courses.

PLEA is in the process of working with Chevrolet to facilitate additional hands-on testing of the Caprice at our EVOC at a later date when the current Ride & Drive tour is completed.  This testing will provide valuable input and information as to whether the Caprice would be viable as an addition to our current patrol fleet.  The collaborative effort demonstrated today by PLEA and the various Police Department Bureaus and City Departments shows a commitment to striving for equipment that allows us to do our jobs more safely, efficiently, and at a reasonable cost to the citizens who we protect and serve.