Who Speaks for our Community? 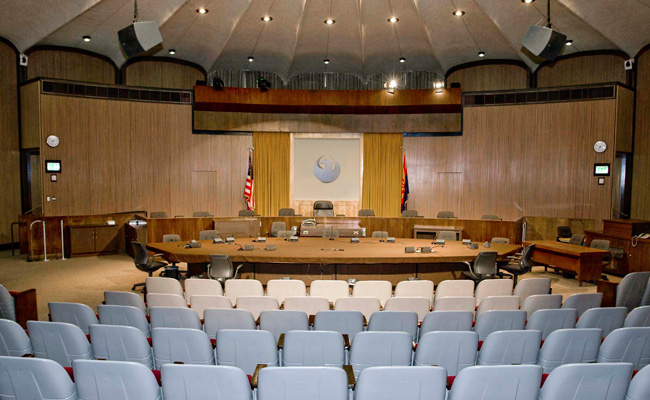 On Tuesday, November 19, 2019, the City of Phoenix Council held yet another policy meeting regarding Civilian Oversight of the Phoenix Police Department.  As PLEA expected, there was much noise and fanfare from Black Lives Matter, Living United for Change in Arizona, LUCHA, and Poder in Action.  Poder in Action took it a step further and had tee shirts printed up proclaiming COPS MUST BE ACCOUNTABLE TO THE PEOPLE, which members from their group wore to the meeting and they also had them on display at a booth outside the Council Chambers.   While we’ll give them credit to the truth of that statement, that’s about the only credit we’ll give them as attendees affiliating themselves with Poder In Action  provided the same tired, worn out rhetoric about Phoenix Police Officers being violent, racist murderers.  There were even comments from a girl who claimed to have only lived in Phoenix for three months, but had concerns about the Department, which makes one wonder if she actually had contact with a Phoenix Police Officer or if she heard if from a friend, who heard it from a friend.

We continue to hear about how “violent” the Phoenix Police Department is.  The hard truth is that sometimes, violent attacks on citizens and our officers must be stopped by using some type of force, which can be considered violent to those who have never been involved in a physical fight or had to resort to using deadly force to stop an equally deadly threat.  While 2018 did see 44 officer-involved shootings, let’s stick to facts, not emotions as to why officers were left with no option other than to use deadly force:

For those who want to criticize using deadly force against someone armed with a knife, knives are considered dangerous instruments and can inflict massive injuries including damage to soft tissue, muscles, and vital body organs, not to mention rapid blood loss if an artery is severed.  For that matter, the same can be done with a screwdriver or a pen.  While officers have less-lethal options like Tasers and stunbag shotguns, they are always backed with lethal force options.

2018 was an anomaly with regards to the number of officer-involved shootings and the experts at the National Police Foundation, who conducted a $450,000 study did not reach a definitive conclusion, but identified noteworthy factors including:

The bottom line is that officers are authorized by law and policy to threaten and use deadly force in situations where it can be justified to protect others or themselves.  While the buzzword “de-escalation” is often brought up by the activists, many of them can’t even explain it, however, sometimes, threatening or using deadly force is a form of de-escalation as it resolves the situation. An additional note is that in 2018, no Phoenix Police Officers were indicted or charged by the Maricopa County Attorney’s Office, meaning their actions comported with Arizona law regarding police use of deadly force, ARS 13-410.

PLEA President Britt London spoke and expressed his concerns about what “Civilian Oversight” would look like, what it would do, and of course stated we’ve had it for decades with civilian participation on Disciplinary Review, Use of Force, and Civil Service Boards.  He threw in the caveat that we could always add more civilians to these panels which have proven time and time again they work, but also mentioned that the main reason we are experiencing this big push is that “the squeaky wheel gets the grease.”

Let’s look at that squeaky wheel.  In the aftermath of the Trump Rally of 2017, when then-Mayor Greg Stanton was in office, the Phoenix Police Department started coming under attack from what are clearly radical progressive groups looking for any excuse to prevent the Department from performing its core law enforcement functions which include exercising the authority and responsibility necessary to protect life and property, apprehend persons who commit unlawful acts, and defend the rights of crime victims and witnesses.  Evidently, using authorized chemical agents like pepper balls and tear gas to disperse violent protesters who attacked our officers standing the line to protect individuals attending the rally is excessive force and police brutality in their world.  While Police Chief Jeri Williams touted the response of the Field Force as successful and textbook, which was echoed by other police agency heads and national media outlets, groups like Poder in Action and Puente thought differently.  Now-City Council Member Carlos Garcia, who was a Puente activist at the time, hijacked a City Council meeting held shortly after the rally and then-Mayor Greg Stanton, instead of holding him to the rule of order, ceded control of the meeting to him and the other radical activists in attendance and things went downhill from there.  PLEA believes Greg Stanton’s lack of action empowered and emboldened Poder in Action, Black Lives Matter, Puente, and LUCHA to become increasingly more dominant and defiant at City Council and Public Safety and Justice Subcommittee meetings.

Another by-product of the Trump Rally was City Manager Ed Zuercher’s proposal through the City Attorney, engaging an outside firm to “assess the preparation and response by the Phoenix Police Department to the events of August 22 surrounding President Trump’s campaign rally in downtown Phoenix.”  This decision was based on an agenda being pushed by then-Mayor Greg Stanton and then-Councilwoman Kate Gallego due to pressure from groups including Puente and the ACLU.  PLEA began to research the “outside firm” OIR Group Inc. and determined that they are a group of civil rights attorneys who make a living second-guessing police agencies and police officers, primarily in California, including the Oxnard Police Department, however they have litigated in other states including Oregon.  Through our network of police labor association attorneys who represent some of these associations, we learned that inviting OIR Group to “review” the Phoenix Police Department would have similar implications like when the City hired the Berkshire Group a few years ago.  In other words, they dictate how the department should be run, based on their opinions and perspectives.  Additionally, OIR Group is also a major advocate of civilian oversight of police agencies, where civilians dictate police policy.  As you connect the dots, you can clearly see our current state of affairs began under Greg Stanton’s watch with now-Mayor Gallego and Councilman Garcia being key players in the equation.

Fast-forward to earlier this year and two high profile incidents, where not every fact was known or information that was known wasn’t released, catapulted the push for Civilian Oversight; the “shoplifting incident” and the “Facebook Investigation” where Mayor Gallego and Chief Williams went on the “apology tour” leading us to where we are today.  During a public meeting held at Pilgrim Rest Baptist Church, the sanctuary, which seats 2500, was filled to capacity and those who couldn’t get in were outside on the property.  Follow-up meetings were held at the City Council Chambers, which seats 222 people on the main floor with additional seating in the basement, and additional meetings were held at the Orpheum Theatre, which has a floor seating capacity of 1062. Using simple estimates based on the number of people who more than likely attended these meetings and were not pro-Phoenix Police Department, would put their total at approximately 4,000.  At the City Council Policy Meeting held on Tuesday, November 19, 2019, the floor seats at the City Council Chamber were filled and the majority of those in attendance appeared to be affiliated with Poder in Action because they were wearing the tee shirts on display outside.  There were very few people who appeared at that meeting who spoke against civilian oversight and based on comments we saw on our Facebook page, it had to do with not being able to attend because of obligations like work.

PLEA believes it’s time for the silent majority to reach out to the Mayor and City Council and tell them what your feelings are.  The future of the City of Phoenix and the Phoenix Police Department depend on it.