On Wednesday, February 17, 2010, the editorial staff of the Arizona Republic described the Phoenix Law Enforcement Association by writing, “PLEA has long been the city’s most recalcitrant union.” Was this a criticism or a commendation?  At first blush, police officers who risk their lives on a daily basis might take offense at this description.  But when one considers the history of the word, the antonyms that offset the term, and the management style of Phoenix and the police department, it might become easier to consider “recalcitrant” as a backhanded compliment.  Dictionaries tell us that the word dates back to approximately 1843 and comes from a French word which literally means “kicking back.”  It carried the sense of “to resist obstinately” – similar to a victim fighting off and kicking back at an attacker.

Listen Now! to comments on the topic aired on the Mike Broomhead show on KFYI on Friday March 5, 2010.

The evolution of the word as used today carries a range of meanings including aggressive, bold, gutsy, daring, challenging, resistant, indomitable, defiant, and willful.  Antonyms of the word provide meaningful context for a deeper understanding.  For recalcitrant, antonyms include amenable, obliging, and passive. PLEA “kicked out” at an illegal immigration policy that was imposed on Phoenix Police Officers – a policy that was not in line with 70% to 80% of the citizens, a policy that lacked deterrence and common sense, a policy which failed to address the high cost paid by Phoenix Police Officers and the Hispanic community.  The policy turned a blind eye to the rule of law and was clearly connected to the deterioration of the quality of life in our city.  Yes, PLEA was recalcitrant.  The Association challenged the obvious problem.  At the members’ direction, we did not passively sit by while damage was being done to our cops and their communities.  Chief Harris did the right thing, changed the policy, and almost as if a switch was thrown, crime dropped double-digits.

PLEA is recalcitrant with a rifle policy that currently leaves 8 out of 10 first responders without the option of personally purchasing and qualifying with a tool that provides the operator more safety, more accuracy, and less risk of harming bystanders.  PLEA has an obligation to patrol officers to “kick out” and challenge the obvious problem.  Your Association cannot passively sit by while the Phoenix Police Department’s current rifle policy is out of sync with the needs of front-line officers and surrounding Valley agencies.

A broken booking process that has tied up sworn officers for hours for over a decade was not an amenable way to provide service to taxpaying citizens.  Those who pay the bills expect their police to be on the street, not standing in line waiting for a County Health Nurse to render a medical screening verdict for admission to a jail cell.  PLEA, as a good community partner, had an obligation to “kick out” at this inefficient process and resist the waste of manpower and money it generated.  Yes, the Association was indeed recalcitrant.  Chief Harris did the right thing by implementing a new off-site booking pilot program in May.

Police officers who walk point and man a post by taking daily risks to protect their communities deserve to have their pensions protected from upper-level police management abuse.  For PLEA to turn a blind eye and not challenge pension abuse emanating from the local Phoenix pension board would have smacked of nonfeasance.  The Association “kicked back” and made what was clear to street level cops clearer to police managers by having the legislature define in the pension rules “same position” as “any similar duties.”  When it comes to guarding police officers’ hard earned pension, PLEA was the most recalcitrant union.

At the employee memorial on Tuesday, February 16, 2010, the program listed Melissa Wright performing “His Eye is on the Sparrow.”

Melissa beautifully performed the old Christian hymn.  After the service, I thanked her for sharing her beautiful talent and asked her about a word that she left out of the song.  She too was disappointed that the City directed her to remove the name “Jesus” from the church hymn.  Prior to this, a member contacted PLEA and was concerned that the City calendar for 2010 had replaced Pearl Harbor day on December 7 with Islamic New Year.  One might wonder if other employees and citizens in the City are feeling a bit more recalcitrant with decisions like these. 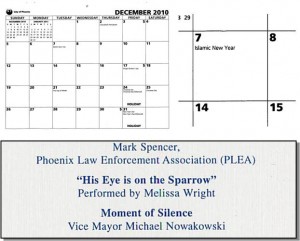 Being gutsy, daring, and challenging is what a progressive association does.  PLEA’s 2400 members along with our community partners expect the Association to “kick back” at poor policies and challenge rule violations.  Why would anyone embrace a work environment that produces expensive and inefficient staffing decisions and is slow to address supervisory abuse of officers of a protected class?  Back door deals and dollar driven politics should be defied not excused.  One would expect police officers to resist a system that misses the mark in common decency and common sense.  Over the past several weeks, I’ve been reminded that PLEA members have a clear understanding of what a UNION is for and their willingness to sacrifice individually to assist the Association as a whole.  An effective way for evil to prevail is for good people to do nothing.  PLEA members are stepping up to help the community and each other.

Some police management associations and fraternities believe it’s their duty to support the policy-makers.  Definition: passive.  PLEA’s guiding principles – positive partnerships, aggressive representation, and holding management publicly accountable – prompt us to remember that it’s all about the members.  PLEA, like police officers, don’t look for a fight, but if you swing at them, don’t be surprised by the response.  Yes, in the context of the day and in light of these principles, the Arizona Republic was correct – PLEA has been the city’s most recalcitrant union, not because it wants to be, but because it has to be.