The 20th Anniversary Nationwide Briggs/Scott Memorial Golf Tournament held on Saturday, April 24th 2010, at the Pointe Hilton Tapatio Resort was a great success in raising funds for TAPS (Tuition Assistance for Police Survivors).  Over $18,000 was raised and over 220 golfers came out to show their support for this charitable event.  A special thanks goes out to Nationwide who was the primary event donor for the third consecutive year.  The event would not have been possible without their support.  The following donors provided an abundance of prizes for the raffle table: 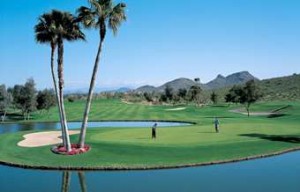 This year’s PLEA team (pictured above) was comprised of City Manager David Cavasos, Assistant Chief Kevin Robinson, PLEA’s Chief Negotiator Will Buividas, and Councilman Sal DiCiccio.  The PLEA team extends its appreciation for all of those who invested time, money, and effort in making this meaningful event possible.  Special thanks to Det. Scott Sayban of the Vehicular Crimes Bureau for once again taking on the monumental task of coordinating this spectacular event.