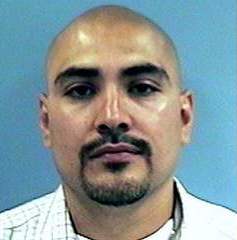 On Saturday, October 13, 2012, at approximately 3:00 am in the area of 5900 West Van Buren Street, Angel Padilla fired 37 rounds from an SKS rifle at a Phoenix Police Officer, who pulled him over for a traffic violation.  Unbeknownst to the Officer, Padilla, an ex-convict who was released from prison in May 2011 after serving a 10 1/2 year term for second degree murder, had just kidnapped his ex-wife from her residence.  Thankfully, the Officer, who received minor injuries from broken glass, was able to exit his marked patrol vehicle and take cover from this blatant and vicious attack.

On Monday, October 22, 2012, PLEA, in partnership with Silent Witness, and the Phoenix Police Sergeants and Lieutenants Association, PPSLA, contributed a total of $5000 to the reward for information leading to the location and arrest of Padilla.

This incident is a prime example of the harsh reality of the dangers that rank and file Phoenix Officers face every day they hit the streets to protect our Citizens.

CLICK HERE for a printable copy of the Reward Flyer provided by Silent Witness.