The current police management team appears adept at reasoning away their own misbehavior while at the same time quickly retaliating against those who report managment misconduct.  PLEA associate member Phil Roberts complied with policy and reported misconduct.  As a result of his crying “foul” on police management, that made him “fair game.”  In less than 48 hours after a misconduct memo authored by Sgt. Roberts was published by the media (see An Explosive Situation on this website), Phil was ordered to clean out his office at Robbery immediately and his temporary assignment to patrol was made permanent (PLEA provided assistance to Phil in moving his office materials from 620 W. Washington to 700 Pct).  PLEA finds it odd that the department has specific policies in place that demand officers report observed acts of misconduct but then punish those who report the “wrong types” of misconduct.  When the “wrong type” of misconduct is reported retaliation is often the order of the day. As the saying goes; If it looks like retaliation, sounds like retaliation, and walks like retaliation–it’s probably retaliation.  Perhaps a timely reminder from Edmund Burke is appropriate: “All that is necessary for the triumph of evil is for good men to do nothing.”  Sgt. Roberts is a commendable example that sometimes doing the right thing in the Phoenix Police department has a cost CLICK HERE to read the article from News 5. 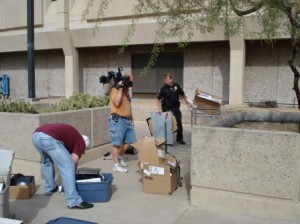 Listen Now! to the Grenades Part 2 audio from the JD Hayworth show including an interview with PLEA President Mark Spencer.