Councilman DiCiccio – We Need Your Help!

Mr. DiCiccio, your email blasts across the Valley have made it clear that you’re concerned about “services to libraries, seniors, children and parks” and how budget restraints have negatively impacted them.  Like you, Unit 4 members (the police officers the City has a contract with) and their Association have made a commitment to our community partners.  This commitment was the reason Citizens for Phoenix partnered with PLEA, and at the direction of Phoenix Police Officers, PLEA agreed to 3.2% in wage concessions and supported a temporary 2% food tax.  We, like you, thought it was vital to come to the aid of the vulnerable in our community during difficult economic times.

Mr. Diciccio, you have supported Phoenix Police officers on a variety of non – economic issues over the years to include support on controversial use of force incidents, some legislative issues and more equipment i.e. patrol rifles.  Still, you are quite comfortable bashing public safety because, in your world view, those who risk it all everyday have too many benefits and get paid too much.  Mr. Diciccio you seem to forget that 10 years ago those in the private sector were riding high on the hog and government workers were at the bottom of the heap.  Did you bash the private sector because they had too many benefits?  Were you railing against private corporations because they were making double or triple what those in government service were making?  No….the silence was deafening.  It’s only when the tables are turned and people in the private sector are on hard times that government workers become easy political targets.

Even with concessions and temporary taxes, the phone is still answered when people dial 911.  The same concessions and temporary taxes haven’t stopped the vacancy rate in the Phoenix Police Department from approaching 600.  Within the past three months two Phoenix Police Officers have been shot in the line of duty.  If you need the details surrounding our injured officers, ask Mayor Elect Greg Stanton – he and his wife visited with them and their families in the hospital emergency rooms.  This dangerous “at home” reality sheds a unique light on a national problem.  The following news item was released today:

“According to preliminary data released today by the National Law Enforcement Officers Memorial Fund, 173 officers have been killed during 2011 — up 13 percent from 153 line-of-duty deaths in 2010.  For the first time in 14 years, firearms deaths outnumber traffic-related fatalities…” 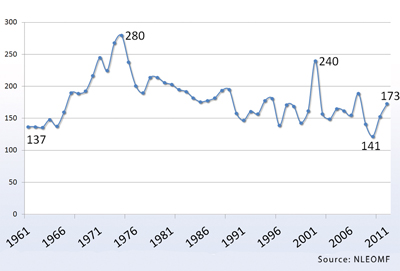 The report continues by saying: “Especially troubling, 68 officers were shot and killed during the past year, an increase of 15 percent over the 59 killed by gunfire in 2010. A majority of these fatalities occurred as police officers were attempting an arrest, responding to domestic disturbance calls, or investigating suspicious persons or circumstances  ‘Drastic budget cuts affecting law enforcement agencies across the country have put our officers at grave risk,’ declared NLEOMF Chairman Craig W. Floyd.”  Perhaps there’s a good reason wages, rights, and benefits are important to front-line first-responders.

It seems, prior to and outside of negotiations, you’ve made your mind up as to the value of Phoenix Police Officers – no raises.  One wonders if the Goldwater Institute considers this “bad faith bargaining.”  In assisting with pension and illegal immigration issues, Goldwater Institute reporters had no problem utilizing PLEA’s expertise while at the PLEA office.  You also seemed comfortable when you visited us in an effort to garner our support and input.  In case you or the Goldwater Institute have forgotten, you’re more than welcome back to the PLEA office to see the photos of the 36 dead police officers you passed by when you walked in.  You know, those officers who gave their lives in pursuit of the rule of law.

With all this said, when the next Phoenix Police Officer is killed or injured in the line of duty, would you please consider and be willing to help us at the hospital, the morgue, or the funeral in telling the widow and other families members that their loved ones get paid too much money and, in addition, should never have been allowed to ride on a City bus for free?  Also, in looking at the line-of-duty death graph, please let us know what you believe is an acceptable casualty rate as it relates to pay raises.  One more thing – why not take the time to come out and ride with first-responders to get a slightly different perspective a City Hall office or the Goldwater Institute just can’t provide.  Things look a little different at three in the morning in a dark alley at 24th Ave. and Van Buren St.  And Mr. DiCiccio, just so you know, if you, like police officers, leave the safety of your home and go to dark and dangerous streets of Phoenix, you too could get hurt.  Bad guys don’t care how much money you make.  But that’s OK isn’t it?  Don’t we pay City Council Members taxpayer money to risk their lives also?