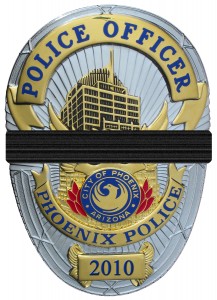 On May 26, 2010, at approximately 0130 Hrs., Phoenix Police Officer Travis Murphy paid the ultimate sacrifice with his life while attempting to detain a suspect that had eluded officers earlier.  The suspect, identified as Daniel L. Martinez, drove at a high rate of speed into the neighborhood located at the 1900 Block of W. Fairmount St.  Neighborhood residents called the police to report suspicious activity and Officer Murphy and his partner responded to investigate.  Officer Murphy located the suspect nearby and the contact quickly escalated to a gunfight.  Officer Murphy ultimately sustained fatal injuries.  The suspect was subsequently located nearby and and taken into custody.  Our thoughts and prayers are with Officer Murphy’s family and co-workers during this very trying time.

Listen Now! to comments aired on KFYI on the Mike Broomhead show on Wednesday May 26, 2010.

Below is News 12 video coverage of a press conference held on May 26, 2010, at the shooting scene.