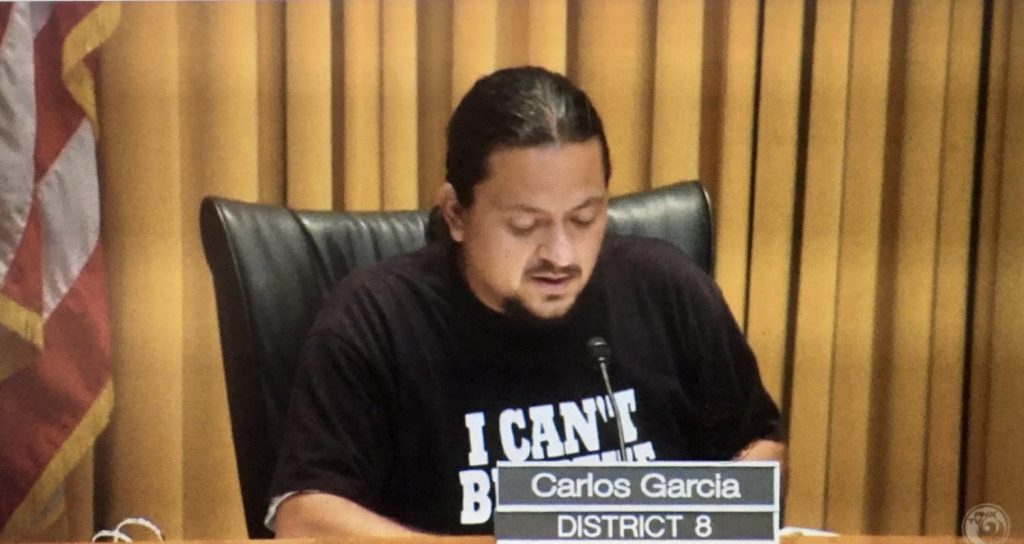 It’s no secret that Phoenix City Council Member Carlos Garcia cares less for law enforcement.  Several years ago, he was arrested during anti-SB1070 protests and in 2017 after the Trump Rally in Downtown Phoenix, he and members of Poder in Action hijacked a City Council meeting and criticized the Phoenix Police Department for what was essentially a textbook response to the actions taken by anarchist protesters after orders were given to disperse.  He is probably best known for his interaction with Arizona State University Police last year after being stopped for operating a vehicle with suspended license plates in Downtown Phoenix where the interaction was captured on Body Worn Camera.

Yesterday, June 4, 2020, a City Council Meeting was held regarding approval of the 2020-2021 City Budget which came in the wake of five days of civil unrest where protests were held nightly in Downtown Phoenix.   The initially peaceful protests required police intervention when when orders to disperse due to unlawful assembly were ignored, and some protesters began throwing items including rocks and bottles at our Tactical Response Units who were there to keep the peace and protect people and property.  Mr. Garcia posted a letter, written on City Letterhead, on his Official District 8 Facebook page condemning the Phoenix Police Department.   Several groups including Poder in Action and Black Lives Matter were outside the Council Chambers demanding that the Phoenix Police Department be defunded, and that money be allocated to community programs which in their opinion, would be more effective in preventing crime than having the police.

Due to the current COVID-19 restrictions, community members who would normally be able to speak at the podium inside the Council Chambers during public comment, had to call in to express their opinion.

While the majority of the callers were in favor of de-funding the department, there were calls of support including one from  District 8 resident, Alyssa Peralta, who told things from the perspective of a resident of his district, who sees him using his elected position as a platform for his own political agenda and has done nothing to benefit and improve the impoverished areas he represents.

CLICK HERE to read a transcript of her comments.