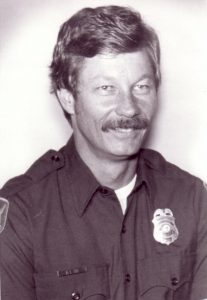 On January 8, 1986, Phoenix Police Officer Robert T. Fike was shot and killed by Matthew Milburn shortly after Officer Fike contacted him while he was inside a vehicle parked behind the Circle K Store located at 1111 East Indian School Road.

Milburn was no stranger to trouble and already had already served time in the Arizona Department of Corrections for burglary.  Earlier, he committed an armed robbery and was using cocaine when Officer Fike contacted him.  A struggle occurred while Officer Fike was patting Milburn down, and Officer Fike was disarmed before being shot and killed execution style.  Shortly afterwards, two citizens came upon Officer Fike’s patrol car and found his lifeless body on the ground next to it, then called for help using the police radio.  Milburn was eventually located and taken into custody seven weeks after the shooting after investigators developed enough information to tie him to the murder.  Milburn initially denied his involvement and blamed an unnamed and still unknown co-conspirator, but later admitted he was responsible for Officer Fike’s death. Milburn accepted a plea bargain, which spared him from the death penalty, was sentenced to life in prison and began serving his term on July 3, 1986.

Since Milburn is serving a life sentence, he is eligible to annually apply to the Arizona Board of Executive Clemency for parole.  Under the current state of emergency declared by Governor Ducey, Milburn’s hearing was held via teleconference earlier this morning. PLEA President Michael London, Assistant Chief John Collins, a representative from the County Attorney’s Office, one of Officer Fike’s friends and Officer Fike’s brother-in-law all testified on behalf of Officer Fike, his family, Phoenix Police Officers and all police officers. As was the case last year, the Clemency Board unanimously voted to deny parole for Milburn.