Some say the flag — which is a black and white U.S. flag with a blue stripe through it — it is a way to honor police officers killed in the line of duty and the blue line represents the border between chaos and order. Others say the flag has been co-opted by white nationalist and so-called alt-right groups and makes people of color feel unsafe. 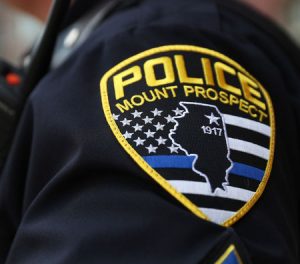 The Mount Prospect police patch is stitched onto the uniform of a sergeant as he guards the entrance to village hall before a meeting of the Village Board to vote on whether or not to change the design of the patch to eliminate the “thin blue line” flag on Aug. 10, 2021. (Photo/John J. Kim)

“I support our Police Department,” Saccotelli said. “Mount Prospect does not exist in a vacuum. We are influenced by events and actions outside of our town. When our symbol meanings change, we must adapt to better serve our customers, all of the people of Mount Prospect.”

Hoefert said the police are under siege across the country because of “horrific” actions by a few bad cops. The Mount Prospect Police Department is made up of “some of the finest women and men” and they honor their fallen colleagues through their patch, he said.

“What and who defines when something has been co-opted? … It’s a matter of opinion and public perception,” Hoefert said. “I also believe that original intent is very important … as such I support keeping the police patch as I believe its intended and its true meaning affixed to our police officers to honor the fallen is still as valid and important today as it was when it was originally designed.”

A redesign process for the patch will be handled as a separate matter, Hoefert said.

The issue gained national attention in June when Officers Lisa Schaps and Chris Berg went on Fox News to defend the patch. Schaps was subsequently reassigned from her position as a resource officer for Prospect High School, which precipitated another appearance on Fox, this time with Mount Prospect police Chief John Koziol. Schaps was later reinstated to her original position for the upcoming school year.

About 60 people spoke at the roughly four-hour meeting. The majority of the people who spoke on either side were white, and most of the people of color who spoke supported removal.

Common themes among people who support the patch were that the flag is not racially insensitive or politically charged and that changing it would give legitimacy to the white nationalists who fly it at rallies.

People who would like to see the patch redesigned pointed to its use in the Charlottesville riot and the Jan. 6 insurrection. They also said the patch sows division in the community and makes people of color feel unwelcome.

Koziol gave a presentation in defense of the patch. There is a twofold meaning to the flag for officers, Koziol said. The blue line itself represents the line between chaos and order, which police uphold. Also the flag is a remembrance of the police officers killed in the line of duty.

It is a “slap in the face” to police officers when people say the flag is a symbol of hate, Koziol said. It is impossible to both support the police and say that the patch is divisive. Defending the patch is a way to stand up to the “vilification of American law enforcement.”

Koziol addressed the objection to the flag on the basis of its presence at the Jan. 6 insurrection by saying “the only blue line I saw that day, during that riot, was the Capitol police, making up that thin blue line between chaos and order. Despite being overrun and understaffed, they held that line the best they could.”

“Let me assure you, police officers hate white supremacists,” Koziol said. “All we end up doing is standing on the line, blowing our weekends, our days off, to protect this hate speech from them. But that’s what we have to do.”

One resident, Paris Donehoo, used his evolved thinking about the Confederate flag as an analogy for why the patch should be eliminated.

Donehoo, a native of Georgia, used to display a Confederate flag in his basement. He was aware of the controversy around the flag, particularly that Black people saw it as a symbol of racism, but to him the flag was simply a way to recognize his Southern heritage.

“To me it symbolized a world of sweet tea and stories on the front porch, and a culture that, for all its faults, shaped in me certain values and graces that I still treasure,” Donehoo said.

One day he saw a pickup truck in Elgin with a number of hateful, obscene bumper stickers and the Confederate flag flapping in the wind, he said.

“I was disgusted, heartbroken and embarrassed,” he said.

He took down the flag because he realized he was guilty by association, despite what the flag meant to him, he said. Donehoo said he recognizes it’s a privilege to not be offended by the flag. The least he can do is not have the flag in his house to show compassion for “my African American sisters and brothers,” he said.

“For many of us removing that patch would be as painful as removing the flag from my wall,” he said. “Yet given its co-opting by groups bent on dividing us on both sides of the aisle, its painful removal just might help bridge the chasms presently tearing our city and our nation apart. Besides, I don’t need a statue or a flag or a patch to know that I’m proud of our police officers. I can see it in their devotion to duty, I can hear it in their words of compassion, I can be inspired by their bravery. Nothing can take that away from me.”

NEXT: Should the thin blue line flag be banned from police departments?