Opinion: A federal investigation is further eroding morale and reputation within the Phoenix Police Department when recruitment and retention are already bad. 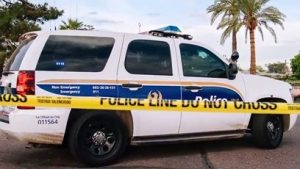 The City of Phoenix is on the brink of a public safety crisis.

The number of Phoenix Police Officers is at an all-time low and is not projected to improve any time soon.

Now, the Department of Justice has launched an investigation into the Phoenix Police Department, further eroding morale and damaging reputation of the men and women in uniform. With problems in recruitment and retention of officers, the safety of Phoenix residents is at risk.

Violent crimes are up, detectives are overworked

What the Department of Justice and the city should be concerned about is rising crime and how best we manage this rapidly approaching disaster. In 2020 violent crimes increased by 15.6%, with a total of 13,659 offenses; criminal homicide increased by 36%.

The possibility of reducing or eliminating squads of detectives that surveil and apprehend violent felons fails the safety expectations of our community. As does eliminating community action officers, school resource officers, or any other already established and successful part of Phoenix policing.

We fear that discussions about not attending certain types of calls for service may be next. It is hard to imagine calling the police department for help and being told that a property crime or traffic collision is not on the service menu, but this is already happening in communities where police personnel numbers are dwindling.

Patrol has calls holding around the clock

This type of personnel juggling within Phoenix Police is being done to help the patrol division maintain a minimum number of officers on the streets. But this minimum number is just that, a minimum.

Precincts such as Maryvale and Mountainview already have calls for service holding around the clock, with the current number of officers in those precincts doing their best to deal with a high call volume in the busier and more violent areas of Phoenix. It has become normal for the officers to start their shift with up to 30 calls for service holding over from the previous shifts, all because of the lack of personnel.

The Phoenix City Council needs to recognize the fast rate of growth and provide an optimum ratio of police officers to residents. Currently, Phoenix Police have 2,908 sworn personnel and 1,077 civilian personnel. The combined vacancy rate for sworn and civilian personnel is 1,035 positions. It is almost certain that these numbers are now lower, as the department loses personnel weekly.

According to the local retirement board’s third quarter report, 826 sworn personnel are currently eligible to retire. Within five years, that number becomes 1,384. The department goal of a 50-person recruit classes every other month has not been met and fewer than 40 new officers were hired in the past few months.

We can’t maintain service at these levels

With less than 3,000 sworn personnel, the Phoenix Police Department will be unable to provide the safe, quality police service that Phoenicians deserve. We must begin building a comprehensive public safety infrastructure to sustain the fastest growing city in the nation.

We believe the first step in approaching these serious issues should be a staffing ratio of 2.5 officers for every 1,000 residents, which would get us closer to the national average and near the staffing ratios of the city more than 10 years ago.

Phoenix must also provide a competitive starting pay for police officers that attracts applicants and draws them away from other departments locally and nationally. The problem surrounding the retention of seasoned officers can be addressed with conversations about post-employment health care. These are just two ideas, but we need city leadership to take this situation seriously.

We hope that the need for safety resonates with the Phoenix City Council and the hiring and retention problems within the Phoenix Police Department are solved so we can put the safety of Phoenix residents first.

Michael Britt London is President of the Phoenix Law Enforcement Association. Reach him at mlondon@azplea.com; on Twitter: @mbrittlondon.