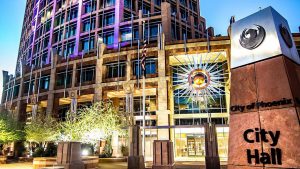 Opinion: The DOJ’s investigation into Phoenix police is yet another step toward us becoming just another mismanaged big city.

The announcement of an investigation of the Phoenix Police Department, and particularly the reaction to it, is another pronounced step in Phoenix’s descent into becoming just another misgoverned big city.

The Biden administration’s Department of Justice announced a pattern or practice investigation of the police department. The ostensible purpose is to determine whether the department systemically violates constitutional and statutory civil rights.

The real purpose is to impose a particular view on how policing should be done, one that emphasizes community engagement rather than protecting residents against predatory crime. The consent decrees that are the end game for these things inevitably go well beyond whatever measures might arguably be required to eliminate truly illegal police activity.

Another real purpose is to bypass democratic processes for deciding how policing should be done and managed. A DOJ white paper about pattern and practice investigations isn’t even coy about this. It says: “Direct negotiations over a reform agreement are bilateral and confidential, to best facilitate reaching an agreement.”

In other words, rather than reforms being debated in public before the city council, elected by the body politic to make such decisions, they are to be negotiated in private with activist organizations, wrapped up into a consent decree, and presented to the city as a fait accompli. Either agree to the entire package or be sued in federal court.

Montini: Investigation does not shake my belief in Phoenix police officers

After a consent decree is entered into, many vital decisions about budgets, police operations and management are no longer made by the democratically elected city council. These are made by court monitors in coordination with activist groups and overseen by a judge.

The Phoenix City Council has been wrestling with what kind of civilian review there should be in police disciplinary matters. The debate has been public and robust. Various votes have been taken with different outcomes.

There is nothing about a civilian review process that is required by the Constitution or federal civil rights laws. Yet the DOJ white paper cites it as one of the objectives of a pattern or practice investigation.

So, the decision about what kind of a civilian review process Phoenix has will be moved from the public debate among democratically elected council members to the DOJ’s “bilateral and confidential” negotiations with like-minded activist organizations.

Phoenix is not a rogue police department

The Obama administration was especially engaged in using pattern and practice investigations to impose a particular view of policing on local governments. The Trump administration curtailed them considerably. The Biden administration intends to revive them.

A pattern and practice investigation is a statement by the federal government that local elected officials, city management and police brass aren’t doing their jobs. In fact, they are running a rogue police department that habitually violates the Constitution and federal civil rights laws.

Despite this, Mayor Kate Gallego, City Manager Ed Zuercher and Police Chief Jeri Williams all said they welcomed the federal investigation. Nary a one offered a defense against the calumny about the police department that is the legal premise for such an investigation.

There will be abuses of power in any police department. And there are grounds for criticism, and perhaps private lawsuits, about certain things the Phoenix Police Department has done of late.

But the Phoenix Police Department doesn’t habitually violate the Constitution or federal civil rights laws. The City Council, city management and police brass aren’t indifferent to abuses or problems. It is a major topic on the city’s political agenda.

It’s a good bet that officers will do much less

This DOJ “investigation” is a perversion of federal law. It isn’t truly intended to remedy constitutional or federal civil rights violations. It is to tip the balance of the political debate about policing in general in a particular direction and move the decision-making outside the local democratic process.

This will not be without consequences. The local reaction to the federal announcement delivers a clear message to street cops: You have no political support at city hall. In fact, you and everything you do is now a data point in an antiseptic academic and legal exercise that has nothing to do with protecting Phoenix residents against predatory crime.

The safest course of action for a street cop is to create fewer data points. Street cops are rarely called to account for stops not made or actions not taken.