By Vinny Vella and Chris Palmer
The Philadelphia Inquirer 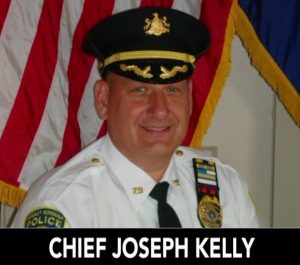 Kelly was struck in the hand and the ear when Colin Petroziello, 24, opened fire with a shotgun inside his unit at the Yardley Commons apartment complex, according to Bucks County District Attorney Matthew Weintraub. The chief had responded to a call for backup from a probation officer who was performing a check on Petroziello at the request of his parents, investigators said.

Weintraub said Wednesday afternoon that Kelly was in good spirits at the hospital.

“I am very, very relieved to share that news with you,” Weintraub said during a news briefing. “Obviously, we are all praying for Chief Kelly and his recovery.”

Petroziello was taken into custody after a 3 1/2 -hour standoff with police. When officers breached Petroziello’s unit in the apartment complex, they found him unconscious in the bedroom, Weintraub said. He did not have any visible injuries, and it was unclear what caused him to lose consciousness.

Three guns, including the shotgun used to wound Kelly, were recovered from the home. He will be charged with attempted murder and related offenses, Weintraub said.

It was unclear Wednesday why Petroziello was under supervision by the county probation office. Court records indicate he pleaded guilty in January to summary offenses including disorderly conduct.

As Weintraub spoke around 3:15 p.m., children from the nearby Yardley Kids Academy day care were reunited with their parents after being locked down in the building, which is across the street from the apartments.,

Jessica DiMaria, who lives in the apartment complex, said she got a text just before 1 p.m. from a neighbor who lives across the street, urging DiMaria to call her.

When DiMaria heard a police officer had been shot four units down from the apartment she shares with her 14-year-old daughter, Angelena, she panicked.

“I had tears in my eyes,” DiMaria said hours later, standing behind a police cordon. “How else can you react when you know your daughter is home alone during something like this?”

DiMaria was waiting for the OK for police to get her daughter, who was told to stay inside her apartment as police investigated the shooting. The girl wasn’t injured, she said, just unnerved by the sound of the gunfire and, later, the breaching charge used by officers to enter the suspect’s barricaded apartment.

DiMaria was stunned, she said, that the sudden outburst of violence happened in her building.

“This is such a quiet neighborhood,” she said. “Nothing ever happens here.”