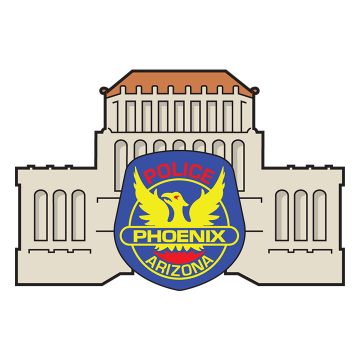 On Wednesday, Oct. 23, 2013, the Phoenix Police Museum celebrated its 20th anniversary with a special event at Alice Cooper’stown, located at 101 East Jackson St. in downtown Phoenix.

The Phoenix Police Museum traces its roots back to 1992, when a small committee of dedicated volunteers began to develop plans and obtain artifacts for a future police museum. In October 1993 the Phoenix Police Museum held its first public display as a small exhibit at the Historic City Hall, located at 17 South Second Ave. A temporary six-month display was created with the assistance of the Phoenix Museum of History. The community enthusiastically received the event, with 300 people attending the grand opening.

Various businesses contributed materials and labor to help remodel the interior. Volunteers worked weekends and after hours to remodel the space. Approximately 25 to 40 volunteers, including then-Police Chief Dennis Garrett as well as active and retired Department employees, assisted #9288 in weekend construction projects. The volunteers prepared the exhibits, including a mockup of a 1910 city street, a memorial room, an old jail cell, safety programs and interactive displays involving police vehicles and uniforms. The opening of the first exhibit in the Barrister Place location was on Friday, Oct. 6, 1995.

After 20 years, history came full circle as the Phoenix Police Museum relocated back to Historic City Hall and reopened in July 2012. Our new site was the location of our Department from the late 1920s to the mid-1970s, and it has always been our goal to go “back home” to our old police station. The relocation allowed us additional square footage for displays, a full basement for storage and access to the old City Jail on the upper floor.

The Phoenix Police Museum is funded solely by private donations and operates with a small budget. It does not charge an admission fee in order to allow everyone accessibility. Approximately 1,800 police officers and employees contribute $5 per month through voluntary deductions from their paychecks to support the museum, and other donations come from retirees, City employees, businesses, organizations and the general public. Over 7,500 adults and children visit the museum each year. PLEA has been a supporter of the Phoenix Police Museum since its inception and holds a position on the museum’s board of directors. We appreciate the time and effort that everyone has put into the museum to take it from dream to reality as it shows how the Department evolved from the days when Henry Garfias was elected as the first City marshal in 1881 to our current agency of approximately 2,900 sworn personnel plus equally important civilian staff.