On December 8, PLEA Charities and the Arizona Probation Officers Association (AZPOA) hosted the 12th annual Shop With a Cop at Kohl’s in north Phoenix. This year, PLEA Charities graciously received a grant from the West Valley Mavericks Foundation that fully funded the event. Thanks to the Mavericks’ support, we were able to provide a memorable holiday experience for 180 young people ages 7–12 — our biggest event yet. This grant was critical to the success of the event, and we look forward to continuing our relationship with the Mavericks, a premier foundation in the West Valley.

Participating officers were assigned a child and they picked them up in a fully marked Phoenix Police Department vehicle, chauffeuring them to Kohl’s. After checking in, everyone enjoyed breakfast burritos, freshly baked doughnuts, fresh fruit and hot chocolate. The children also completed small crafts to take home after the event, and were given goodie bags with gift cards donated by Domino’s and winter gloves and hats donated by Target. After breakfast, children watched the arrival of Blue Santa, courtesy of the Phoenix Police Department Air Unit, and a Phoenix Police K-9 Unit demonstration.

Inside the store, the children had the opportunity to take a photo with Blue Santa and tell him what they wanted for Christmas.

Then the shopping began. Each child submitted a wish list of items, and officers were paired with children to help them shop for gifts. They were allowed to spend $175 per child, and in some cases our officers used their own money to cover the spending that was over the allotted amount.

After the shopping was finished, the officers and children went outside to wrap gifts under tents provided by Arizona Bounce Around, and everyone was kept warm by the patio heaters provided by Home Depot. Children were also able to enjoy exhibits that were staged in the parking lot by the tents. The Special Assignments Unit (SAU) displayed its BearCat tactical vehicle, and Duncan and Sons Lines brought two semi-trucks. The kids had a blast climbing into the trucks and blowing their air horns.

Once the kids were done wrapping gifts, the officers transported the children back home to deliver the gifts to their families.

This was the largest Shop With a Cop event that PLEA Charities has hosted, and the largest such event in the state of Arizona! We understand the struggles that these children and their families are going through, and we wanted to expand our limit from 150 children to 180. We are so proud of our officers who have returned every year to participate because they believe in what their time means to the youth. We want to thank all the sponsors, donors and volunteers. We also want to thank all the police officers and probation officers who helped with this event. 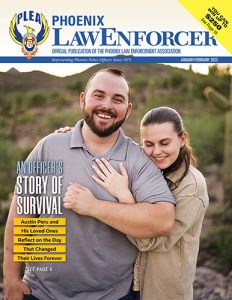