Last year, at our first-ever Retired Phoenix Police Officers/Dispatchers Picnic, 225 people showed up. This year, our attendance was estimated at approximately 270. One thing different about this year’s picnic that set it apart from last year’s was that we had many attendees who came from out of state, including Missouri, Texas, Pennsylvania and Washington. We also had people who came from all corners of Arizona.

The success of this picnic and fundraiser for the Phoenix Police Museum was dependent on the efforts of many volunteers, including Dave Lane, who for two years in a row has generously donated a new firearm. This year he was joined by Steve Proctor, who also donated a new firearm. Both firearms were raffled off and brought in $3,195 to help with restoration at the Phoenix Police Museum. Thanks to Martha Proctor for her help with the raffle.

Ruthie Cooper designed and had a custom banner made for our retired Phoenix police and dispatchers group, and we will be using this at our events in the future. Thanks, Ruthie!

Fran Anatra, Nan and Cave Golding, and Ruthie Cooper worked hundreds of hours contacting businesses and retirees in Cottonwood, Prescott, Payson and the greater Valley area in obtaining gift baskets, which were also raffled off. There were approximately 50 different gift baskets or items, which included getaway vacations, as well as fine wines. This fabulous raffle took a huge effort to put together and brought in $2,065. Thank you for your efforts!

Sherry Sparks was a huge help to me in selling Phoenix Police retiree polo shirts and hats. As I was hobbling around with a fractured knee and sporting a brace and cane, Sherry was my right-hand lady.

Thanks to Mr. and Mrs. Larry Sheets, and Ed and Kim Catlett for working the sign-in table. That is a very tough and hot job, but they stuck it out and did a great job.

Our very meaningful invocation for fallen and current officers was presented by Cleo Lewis, who also filled in as our official photographer.

And of course, the biggest thank-you goes to those of you who donate, attend and support the reunion picnic, and our Phoenix Police/Dispatcher Facebook Group, which is currently at 563 strong and still growing. None of this would be possible without “the group.” You have made this the success it is.

Several retirees still owe money for their polo shirts but when those are all tallied (since all proceeds go to the museum), our grand total for the Phoenix Police Museum will be $5,560! Good job, all.

As a side note, retired Officer William Treadwell, #868, is in an assisted living facility in Milwaukie, Oregon, and would like to receive cards and/or letters from fellow retirees. One considerate retiree has offered to send him the Department newsletter, but whether you knew him or not, let’s let him know we all still care about a fellow PPD retiree. His address is: 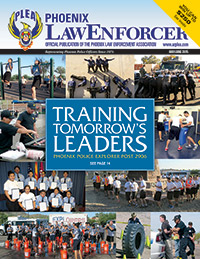