By the time you read this, our contract, or memorandum of understanding (MOU), with the City of Phoenix for fiscal years 2021–2023, will have been presented to and passed by the City Council. I want to thank those of you who were able to take the time to come to the PLEA Office or attend virtual meetings explaining the proposed contract.

This contract not only provides for increased compensation, equipment stipends, trainer pay and more, but it is representative of community concerns, taking steps to address issues our City thinks are fair.

Our profession is changing. All it takes to see this is a quick glance at web news. Politicians are making new laws governing police practice, and municipal employers are modifying police policy. Read about some of the changes in our nation’s largest police departments or federal proposals on universal police policy, and you will have a good idea of what seems to be inevitable. Change can be difficult, and particularly so when policy and practice have been the same for years, but it does not have to be bad.

I want to thank those of you who were able to take the time to come to the PLEA Office or attend virtual meetings explaining the proposed contract.

Police reform is being seen everywhere, and the focus on Phoenix has intensified in the past three years, most likely because we are the largest city in the Southwest United States, and we have no formal office of oversight and are not under DOJ control. To us, the initial thought of changing any existing policy was absurd. “If it ain’t broke, don’t fix it.” That argument was not enough for our elected officials, but more importantly, it was not enough for our community. Through polling, community meetings and input from our community partners, PLEA learned that most Phoenix residents support our Department, agree that we provide professional service, think we need more officers and want more transparency with the policies and procedures that allow us to enforce laws in the City of Phoenix.

I think most of us understand that we work for our community and have no problem with the flexibility needed to be a government employee. We should have understood that when applying for the job of a police officer, public scrutiny is just a part of the package. Problems do arise when we are treated unfairly for doing what we are trained to do, being accused of an action we did not commit or following a policy that we did not make. There is a difference between making a mistake that can be corrected and committing a crime, and we know that our membership is unafraid of an honest look at honest actions.

The 2021–2023 MOU continues to provide the same due process rights that Unit 4 members are familiar with, and this is the most important part of the contract because it ensures procedures that account for fairness in discipline procedures, should you find yourself the subject of an investigation for a policy violation. 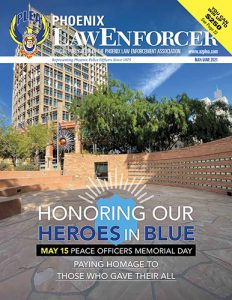