Editor’s note: This article originally appeared in the November 2021 issue of American Police Beat and is reprinted with permission.

In 2014, a police shooting of a young man in Ferguson, Missouri, was followed by protests and unrest across the country. As time passed, “community policing” became a common phrase, both within the law enforcement community and without. As the nation grappled with questions that had no easy answers, community policing became a non-controversial, go-to term that community leaders, politicians and police administrators all seemed to be able to get behind. The term became a sort of panacea that promised to hold all the answers necessary to bridge the void between police and their communities. It’s a pattern that’s been repeated often in the wake of controversial use-of-force incidents ever since. When controversy strikes, politicians and community leaders all throw out the concept as their solution to the problem of the hour. It’s fair to ask, however, whether most of the practice’s proponents really even know what community policing is. More importantly, can it really deliver all that its advocates promise?

Community policing isn’t a program; it’s a philosophy, a way that an agency chooses to approach policing.

What Is Community Policing?

Community policing focuses on community relationships, organizational structure and problem-solving to build safer communities. In far too many cases, the concept is relegated to a special unit in a police department that spends their time doing public relations with the community. Community policing isn’t a program; it’s a philosophy, a way that an agency chooses to approach policing.

Community policing advocates relationships. It achieves this in myriad ways. Alternative forms of patrol (such as on foot or bicycle) are embraced in community policing. Getting out of the car has been shown to have promising effects on community perception of officers and thus can go a long way toward bridging the gap between an agency and those it serves.

Community policing also focuses on giving officers greater discretion to handle situations in ways that help build better relationships with members of the community. One of the ways it accomplishes this is through a “flat” command structure. A flat command structure decentralizes authority and pushes decision-making power down to officers on the streets. It’s based on the idea that officers closer to the streets (and further from the office) are better equipped to make decisions that best handle situations they encounter. We’ve all found ourselves in a situation at some office where the person at the front desk couldn’t make a common-sense decision to help us, because they needed permission from someone far away at corporate. That’s bureaucracy in action. Community policing pushes authority down closer to the streets in order to help avoid those situations.

While this is far from an adequate summary of the aspects of community policing, an emphasis on officers’ relationships with community members and additional discretion for officers are certainly major aspects of the philosophy.

Where Did It Come From?

To truly understand something, it’s often necessary to know the history behind it.

In the early 1900s, law enforcement was in what many scholars call the “Political Era” of policing. The services you got from law enforcement (like many other sectors of government) largely depended on who you knew. Political bosses were often the real driving forces behind police management decisions. Whether you lived in a big city or a small town, there was a good chance that a handful of local (or even regional) power brokers were pulling the strings of your government (including its police department).

The Political Era would meet its match in the form of the Progressive Movement. This same movement that aimed to clean up corporations with laws and regulations also placed an emphasis on reforming governmental systems. It’s fitting, then, that their efforts in the policing arena led to what is often known as the “Reform Model,” also called the “Professional Model.” Where Political Era policing was marked by handling situations based on relationships (who you knew determined how you were treated), Professional Model policing placed emphasis on rules and uniformity. Think Joe Friday from Dragnet (“Just the facts, ma’am!”). Professionalization advocates like August Vollmer and O.W. Wilson called for things like improved training. Reform leaders also found a new ally in the form of #8600 advancing technology. Reformers saw that an officer’s contact with the public on their daily beat could lead to corrupting relationships. Thanks to advancing technology, they were able to safely tuck officers away in the ever-more-common automobile. In the safety of an auto-bubble, they were sure to be free from the temptations of partiality that came when they built relationships with those they were paid to police. Reformers also developed centralized command structures, so that supervisors could ensure officers were adequately controlled and held accountable. Policies were put in place to help ensure that people were being treated equitably.

When viewed through the metric of relationships and accountability, every model hence has been (to some degree) an iteration of either the Political or Professional Model.

In the 1960s, the riots and unrest that swept the nation revealed some of the shortcomings of the Professional Model. While the insulating nature of the model had helped address corruption, it also led to an “us versus them” mentality (both in law enforcement agencies and their communities). The centralization of decision-making authority had also contributed to a more militaristic-looking approach to policing. The intentional avoidance of community relationships had led to better policing in many ways, but it had also created rifts between cops and their communities.

Is There a Downside?

Most of the major aspects of community policing address some fault in the Professional Model. The irony is that these issues didn’t occur by accident. Officers were put in cars on purpose. The Professional Model encouraged them to avoid entangling relationships with the public. Decision-making authority was purposely centralized away from officers on the streets. The Professional Model called for policies, procedures and centralized chains of command to help provide accountability and ensure an ethical, accountable police force. These reforms almost certainly contributed to the sense of separation that community policing aims to address.

That being said, those Professional Model practices were put into place for a reason. They were necessary. Corruption was (and always will be) a problem. Accountability was (and always will be) an absolute necessity in policing. In fact, these are some of the very things that activists are calling for right now. Many state governments are even taking statutory steps to improve accountability.

There will always, by necessity, be a tension between these metrics. Increased accountability measures will always detract from street-level officer discretion. Increased emphasis on relationships will, of course, open the door to the potential for the temptation to bend the rules for a friend. There is likely no simple answer about where our actions should fall on these scales. Like many things in life, it’s less a hard line and more a tension we have to live in and constantly evaluate.

That’s not to say that one should be abandoned for another; quite the contrary. It’s simply a fact that has to be acknowledged as part of the conversation surrounding community policing.

Some activists want police to run their body cams every single moment of their shift. Are these same activists willing to abandon the call for community policing? Body cams used 24/7 are a great policy for accountability, but any cop on the street knows that such a practice would wreak havoc on their efforts to build relationships with citizens who are already wary of police interaction.

Some activists have called for police to use increased discretion in their arrest decisions (such as giving a kid a break to avoid putting them into the system). There’s a great argument to be made for this. But will those same activists be OK with such discretion if an officer chooses to arrest their relative, but a different officer lets a different kid off with a simple warning? That is, after all, the inevitable result of discretion. These are how the realities of these metrics play out in reality. Things are rarely as simple on the streets as they are in the ivory tower.

The reformers who pushed policing out of the Political Era and into the Professional Era are to be lauded for their accomplishments. The changes they made were beyond necessary; they were essential. But sometimes, in the passion of a movement, it’s easy to overlook the unintended consequences of the decisions we make. Accountability and discretion will always happen on a sliding scale, with each on opposite ends. The same is true for relationships and corruption potential. Community policing holds great promise to cure what ails many law enforcement agencies and their communities. But it can only work if cops and their communities can implement it without forgetting the mistakes made by the reform movement. Specific policy decisions need to be talked through and implemented amid much debate and discussion, not rammed through in a knee-jerk reaction. The potential benefit of each decision needs to be weighed against unintended costs.

Life is all about balance, and policing is no exception.

Cliff Couch is the former police chief of a small town in East Tennessee and a graduate of the FBI National Academy, and holds a master’s degree in public administration from Florida State University. He’s attended Harvard’s Executive Education Program and Northwestern University’s School of Police Staff and Command. You can follow him on Twitter @CliftonDCouch or on his blog, LifeofaLawman.com. 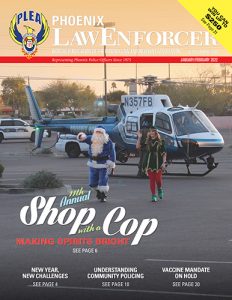