At the April 19 PLEA Board meeting, Britt London resigned as PLEA president. He began his well-deserved retirement on the last day of April. At that same Board meeting, the PLEA Board of Trustees entrusted me to complete the rest of Britt’s term. I would like to take a moment and thank Britt for his many years of dedication to PLEA and its members. Britt has moved PLEA in a direction that was much needed. I would also like to thank the PLEA Board for their support and confidence in me to continue leading the Association.

I want to take some time to introduce myself to those who don’t already know me. I have been a Phoenix police officer for almost 28 years. When I graduated from the academy in July 1994, I was assigned to the Maryvale Precinct. I would spend the next 22 years serving the community of Maryvale on various squads and shifts.

In 2012, I decided to become a PLEA representative. I felt led to be an active part of the PLEA mission of “promoting the positive role of the police profession and protecting and securing members’ rights and benefits through effective representation and professional relationship.”

As your president, I am committed to continuing to be a positive representative of you and PLEA.

I have represented many of our brothers and sisters in a multitude of facets to ensure their fair treatment.

In 2016, I was appointed to the position of treasurer of our Association. Becoming treasurer was quite a career change. I was quite content being a street cop; however, I embraced the challenge. In addition to constructing the PLEA annual budget, I was tasked with being a member of several advisory boards throughout the city to ensure PLEA membership representation. As a member of these boards, I was able to foster many positive relationships within city government.

In 2018, I was honored to be elected to the Phoenix Police Local PSPRS Retirement Board for a four-year term. I have assisted countless members of this Department in securing lifetime benefits after sustaining career-ending injuries during their selfless service to the citizens of Phoenix.

In 2019, I served as the chief negotiator for the first time. That contract was the first in 10 years that included an increase in many areas of compensation after years of furloughs and pay cuts. The contract, which began in July 2021 and extends through July 2023, was the second contract I was tasked with negotiating. It, too, resulted in an increase in compensation and maintained officer rights, which were undeniably being attacked.

Oftentimes, I hear the phrase, “What’s PLEA going to do about …” My response is, “Tell me what you think.” Each and every one of us is PLEA. It’s not just the officers who work in the office. It’s not just the officers who volunteer to be PLEA reps. We all have a vested interest in a positive outcome to whatever challenge is being presented. Let’s get back to the tradition that PLEA began with — the collaboration of like-minded individuals working together to achieve a common goal that will benefit the entire membership.

As your president, I am committed to continuing to be a positive representative of you and PLEA. I will tirelessly advocate for increasing the pay and benefits and increasing rights for arguably the finest police officers and detectives in the nation. I will continue to foster partnerships with the community to further promote the positive role of our police officers and detectives within the community. I will ensure that you are represented by competent and dedicated representatives who will tirelessly protect your rights.

As always, if you have any questions or suggestions, I can be contacted here at the PLEA office or by email at dkriplean@azplea.com. 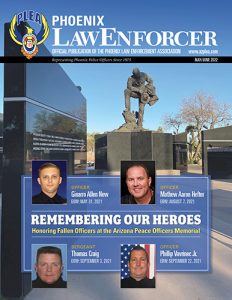