This has certainly been an interesting year. The COVID-19 pandemic hit us in March, shutting down the entire country, and in late May, as things in Arizona were starting to open up, the now-infamous video of George Floyd’s arrest went viral and civil unrest broke out in major cities throughout the country, including Phoenix. While I agree the video looks horrible, I will reserve judgment because I do not have all the facts and I will let due process run its course.

There are many ways calls for service can be reduced without taking money out of police budgets. However, other programs must continue.

The latest mantra to come from the progressive left is “defund the police,” which can be taken in different contexts: reduce public safety budgets, shift police funding to other community programs or, the most radical, completely eliminate police departments. After being part of the law enforcement profession for over 29 years, I can actually buy in to some of these ideas, and I know firsthand the City of Phoenix has been a pioneer in reducing public safety budgets.

There are many ways calls for service can be reduced without taking money out of police budgets. However, other programs must continue, as they foster positive police–community interaction and influence those willing to participate.

Community members are recommending there should be more mental health services, and I would strongly agree. Mental health is not a police matter, and instead of relying on police officers who have been Crisis Intervention Trained to respond, it should be done by mental health professionals. Then if things escalate to the point of serious injury or bodily harm, that might be the time for police intervention. Arizona Revised Statute 36-525 tasks peace officers with apprehension and transportation of people who are court-ordered to be brought into a facility for mental health evaluations. PLEA, through the Arizona Police Association, has tried to have this legislation changed, but the mental health industry’s lobby has been able to convince legislators that this is a police function, and we are still saddled with the task. I believe it is a huge liability, despite the increased use of CIT teams in “soft” uniforms. Mental health pickups have turned into officer-involved shootings after the subject of the call became violent and attacked the officers, leaving them with no response option other than lethal force. These cases have resulted in lawsuits costing taxpayers millions of dollars for doing something that should have been left to medical personnel. Police vehicle prisoner compartments are designed to restrain and contain people, including violent felons, who have been taken into custody for transport to a police facility or jail, and they are not conducive to transporting individuals in mental distress. Ambulances and medical transport vans are specifically designed for this task, and ambulances are manned by trained EMTs who can immediately address any medical condition that may arise during transport. If a patient dies while a police officer is transporting them, the officer becomes the subject of an in-custody death investigation, where, again, an agency can be sued.

Homelessness is a complex social issue; however, the effects of homelessness often become police matters, specifically when they involve criminal acts. Most #9657 street cops who regularly deal with the homeless will tell you many of them suffer from mental illness and substance abuse. For some of them, it is purely a lifestyle choice — they would rather live on the street than be in a structured program designed to help them, because they don’t like following rules.

Minor traffic collisions involving only property damage should not be a police matter. However, because the automobile insurance industry in Arizona has powerful lobbyists, police officers are essentially acting as insurance adjusters. The Arizona Police Association had to fight tooth and nail to get the damage threshold raised to $1,000 from $500 to differentiate between reportable and non-reportable trafficway collisions. As an example, something as simple as paint transfer between two vehicles making contact, where there is no structural damage, can cost thousands of dollars to repair. Absent aggravating factors like serious injuries or impaired driving, as more insurance companies offer apps allowing customers to take photos of the involved parties’ information and damage, then submit a claim, there is no need to have the police involved in what is essentially a civil matter.

Community outreach and youth programs have bridged the gap between police and residents in neighborhoods all over the city, particularly in low-income and high-crime neighborhoods. For those of us who became cops in the 1990s, community-based policing was literally pounded into our heads in the academy, and during field training it was all about beat accountability. Unfortunately, in Phoenix, beat accountability is largely a concept of the past, thanks to the constant reallocation of manpower. We simply don’t have enough patrol resources for a city of our size and have to be continually reactive instead of being proactive. We also don’t have sufficient investigative resources to follow up on the cases generated by patrol officers. There was a time when cops knew the people in their beat and had a finger on the pulse of what was going on. That includes residents, business owners and even the bad guys. If something particular happened or there was a crime trend, most of the time, the beat cop knew who or what was responsible due to positive relationships garnered while working a specific squad or beat area. In turn, they shared that information with squadmates, other patrol squads who covered the same area,
NET teams and detectives. Now, the beat cop is nothing but a call sign, a pinball bouncing from call to call with little time for community interaction and no ability to focus on problem locations to identify the causes of and find ways to reduce crime and calls for service.

The current Phoenix Police Cadet program invites the youth of the community to learn about police careers. It evolved from the Explorer Scout program, a 42-year-old program proven to be a successful recruiting tool for highly qualified recruits. Over the years, it has trained, mentored and coached interested young adults for those positions. A study done in 2001–2002 showed 14% of Explorers from Post 2906 became Phoenix police officers. Current 2019–2020 statistics are as follows:

Statistics from a decade ago show the program was 70% minority (Hispanic) and 34% female, and some of those young adults came from families who were less than supportive of their decision to consider a law enforcement career. In 2010, when the City trimmed the police department budget, it was one of the first programs to go, despite the positive outcome of the program and the thousands of hours in community service provided by the participants. PLEA recognized the value of the program and held fundraiser cookouts. PLEA Charities also started a scholarship program for participants who were going on to secondary education, which is still helping eligible cadets. In addition, the Phoenix Police Department Athletic Club helped out by donating proceeds from the Phoenix Combat Classic shooting competition.

Lately, we have seen increased pressure by community activists to eliminate police officers from school campuses. Post-Sandy Hook, you couldn’t find enough police officers to put in schools, and for the most part, the School Resource Officer program has been effective, not only in educating students but when officers are allowed to do their jobs and take action when crimes have occurred. However, we continually see negative press where SROs have been directed to do the dirty work district administrators and principals refuse to, yet the schools are quick to file complaints against their assigned SRO. Eliminating small problems before they become larger ones is one way these programs are effective. Students form positive relationships with the SRO, in turn earning mutual respect and learning how to be a productive member of society who is willing to follow the rules and effect positive change on their own.

In order to have a professional police department, you must recruit the best-qualified candidates for the position and provide them with a competitive wage and benefits package. Then, you must provide them with the best equipment, technology and training that is available and continually update all of it. This specifically applies to training, and that training should be hands-on for perishable skills like driving, defensive/arrest tactics and firearms. The downside to having a police department like this is that it costs money — money that politicians aren’t willing to spend and that community activists want to take away. 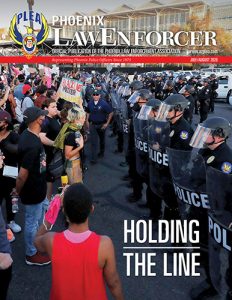