The 2018 Reunion Picnic, hosted by the Foundation of Retired Police Officers, was the biggest and best picnic of the past five years. This was a three-day event, beginning Friday, March 9, with a tour of the Phoenix Regional Police Academy.

For most of the 100 retirees who attended, this was the first time they had returned to the Academy in more than 20 years. Seeing the beautiful, modern campus and learning about new training techniques brought memories, awe and pride for how far we have come from our days as police recruits. Thank-you to Sergeant Sonny Hudson and the training staff for putting on such a great program. Retirees asked whether the program would return next year, and Sergeant Hudson, as we were leaving, did say that he hoped to see us again next year. I hope so, too! After three hours at the Academy, many retirees headed out to the Dubina Brewing Co., at 17035 N. 67th Ave., #6, in Glendale, for refreshments. Retiree Jan Dubina always has great “blue light” specials. 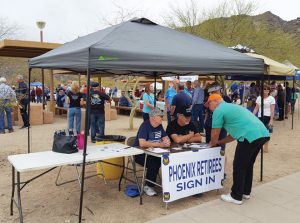 The picnic was held March 10 at South Mountain Park, and it was a wonderful location. Most attendees approached me and expressed their hope that we continue having the picnic there. I’d like to thank retired Commander Robert Demlong and retired Lieutenant Stan Hoover for arranging this venue. We had our own private, secure area with a huge parking lot, and thanks to Chuck Boyd, we had a great hot dog cart and Mexican food truck. The Borderland Band, with our own retired Commander Bill Louis and retired Sergeant Michael “Mic” Sheahan, was outstanding. They really are talented and added so much enjoyment to the picnic. SAU had several of their specialized vehicles there for our grandchildren’s enjoyment, and retired Lieutenant Mike Nikolin brought two antique police cars from the Phoenix Police Museum.

The highlight of the picnic, aside from seeing old friends and winning prizes, was a special ceremony to honor our officers with three-digit serial numbers who attended. The Police Officers Memorial pin was presented by Chief Jeri Williams to each of our 21 three-digit honorees. Two weeks before the picnic, I was missing friends, fellow retirees, who had supported me in starting the Facebook group and our first picnic: Walt Smith, #659, and Tom Kosin, #1528, were the wind beneath my wings and my motivation. It was too late for Walt or Tom to receive recognition for their service to our Department, but thinking of them was what prompted this ceremony. Thank-you, Chief Williams, for making this very special. Our honorees are:

God bless you all. 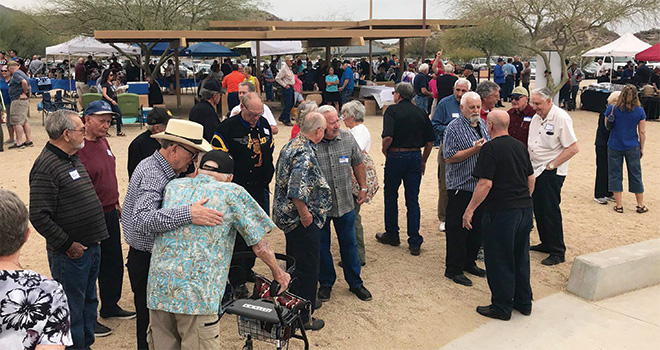 I would like to acknowledge and thank Carol Campbell, who chaired the merchandise raffle, and Steve and Martha Proctor, who have chaired the gun raffle for the past five years.

The amount of money raised and donated to our Phoenix Police Museum this year totaled $10,934:

Thank-you to Ed Catlett and his sign-in crew, who were swamped at times and had to open up a second table to sign in attendees. And thanks to all of you who worked hard selling raffle tickets, working the raffle table, setting up tents and breaking things down at the end of the day. It took a lot of helpers and you all really came through.

Congratulations to all merchandise and gun raffle winners.

Did everyone notice the Phoenix Police Cadets at the picnic?
I had never seen these young people, formerly known as Police Explorers, prior to this event and I was totally impressed with their #9771 performance and actions. They directed traffic into our venue, helped put up tents and were so well organized, polite and professional. They were there to pitch in and help, and did they ever. Nine cadets were present and each of them will make fantastic Phoenix police officers one day. Thank-you, Officer Dave Barrios, for leading this commendable group of young adults.

Another first for this year was our “Authors Table,” featuring former Phoenix police officers who have written outstanding books. This year we had retired Sergeant Darren Burch with Twisted but True, retired Lieutenant Len Zingg with Liars All and retired Detective Tim Moore with Mirandized Nation. All authors donated a portion of their proceeds to a police charity. Gentlemen, thank-you for participating, and I was glad to see your sales far exceeded your expectations.

Thank-you to South Mountain Precinct Commander Jim Gallagher, who, along with some of his precinct troops, attended in uniform and enjoyed hearing stories of patrolling Phoenix back in the “olden” days.

Day 3 of our reunion weekend was an open house at the Phoenix Police Museum. This was very well attended. It was so entertaining to watch the young grandchildren and great-grandchildren trying on the police shirts and sitting in the police car. The Museum staff are all volunteers and we appreciate their opening the doors on a Sunday. It was a great three days and everyone attending any or all of the events enjoyed themselves immensely.

I have enjoyed creating and administering the Officer/Dispatcher Facebook group, followed by the picnic a few months later. I could not have organized the picnic for the past five years without a lot of friends who believed in me and the goals of making retired life a little better for Phoenix police retirees — friends who worked very hard to help get it all started. 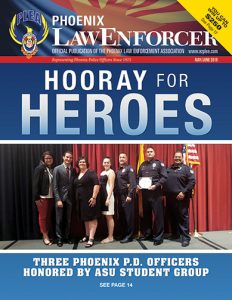