I worked the front desk with Roy (#79) in the mid-’60s. Although we were totally different personalities, we got along great. I admired all the old-timers who paved the way for us rookies. I was awed and even a little envious of their experience. That must have been one hell of a ride they were on during the early days of law enforcement.

Roy was one of the most colorful individuals the Department had at the time. Every day was an interesting adventure, because I never knew which “Roy” would show up. Would it be the laid-back public servant who politely asked, “May I help you?” Or would it be the volatile “Get the hell out of my face!” cop? Either personality was a source of entertainment.

Sometimes, when there was a lot of foot traffic through the locked door that divided the jail elevator from the public hallway that ran past a portion of the front desk, someone, usually a detective, would prop the door open so they wouldn’t have to wait to get buzzed through by one of the desk personnel. Captain Hetz would raise hell with the desk officers every time he walked by and found this door open.

No matter who was working the desk at the time, we always blamed the open door on Roy Lansing, even when he wasn’t there. Hetz would give Roy hell, and Roy’s only comment was “I don’t give a damn.” It got to be a regular thing between Hetz and Roy, until it was more of a joke than anything else. I think Hetz realized that it couldn’t have been Roy’s fault every time, but he went along with the tradition of giving him hell.

Sometimes, Roy would answer the phone and be as polite as anyone. There were other times, however, when he’d pick up the phone and bark, “Police. Waddaya want?” Then, he’d look at me and grin. I sometimes wondered whether he just wanted to provide a shock factor for me as a young officer.

I recall one incident in which the hot phone rang and Roy picked it up. A man reported a shooting. Everything seemed to be going smoothly at first, but shortly into the conversation I detected an impatience in Roy’s voice and a rise in volume.

“What was he shot with?” Roy asked.

“A gun,” the caller angrily yelled. “What the hell else would he have been shot with?”

“How the hell do I know if it was a pea shooter or a shotgun?” Roy yelled back.

The conversation escalated until Roy said, “And the same to you, you son of a bitch.” He slammed the phone down.

All this went on as Chief Paul Blubaum was walking by on his way to his office, which at the time was across the hall from the front desk.

“Paul,” Roy yelled, “when are you going to put me in charge of this Goddamned place so I can straighten it out?”

When the hot phone immediately rang again, I grabbed it before Roy could pick it up. It was the same shooting, but a different caller than the one Roy had hung up on. I was thankful for that.

Roy would often yell when the Chief walked by, “Paul, when are you gonna put me in charge of this Goddamned place?”

Sometimes Blubaum would come by the desk and say, “I’m going to be gone for a few days, Roy. I’m leaving you in charge.”

“About damn time you’re leaving someone in charge who knows what the hell they’re doing,” Roy would say.

“I see him,” the officer said, but he continued his conversation without seeing what the Chief wanted. When I finished my phone call, I asked the Chief if I could help him. He asked if I would help carry some boxes out to his car, which I did. That very night, the desk officer who ignored the Chief was transferred to shift three in south Phoenix.

While Roy would sometimes go ballistic, he would also have his quiet moments. He was an incredible artist and spent many free minutes drawing things, usually on a complaint card — the 3-by-5 cards that complaint personnel sent on a conveyor belt to radio in order to dispatch an officer. Roy would draw cactuses, horses, cowboys, cow skulls and a variety of desert scenes. I urged him on many occasions to make some drawings on paper that he could save. I marveled at his artistry and told him so. Roy would just look at me, and without saying a word, he’d drop the complaint cards with his incredible drawings into the wastebasket. I retrieved some of his complaint-card drawings from the wastebasket, but I regrettably lost them somewhere along the way.

Since Roy had been on the Department far longer than me, I was always curious as to how things were in the early days. I couldn’t get enough of the history lessons Roy would teach. One of the stories Roy told was about when he, Dick Porter and Herb Neal were assigned to patrol South Mountain on horseback.

“Those fools actually rode around in the heat,” Roy said. “I found me a shady bush and took a nap.”

“Yeah,” I replied, “but those fools are now assistant chiefs.”

Roy looked at me as if I didn’t understand what he had said. “Yeah, that’s what I’m saying. They’re fools. I was smart enough to remain a patrolman.”

One night when I was riding the wagon, we received a call of a family fight at a residence not too far from the station. We pulled up to find a man and woman rolling around on the lawn. Roy and his wife were having another one of their friendly marital arguments. Both had had a little too much to drink. We dusted them off and helped them into the house. You did things like that in those days.

I think of Roy on occasion, and I wonder how he saw the world. Was his attitude contrived, or was it real? How could a person have such incredible talent and quietly draw so many beautiful things one minute, and the next minute scream at an angry caller? He was a marvel of complexity, an enigmatic compilation of talent and goofiness. But then, I guess we all are. Rest in peace, Roy. 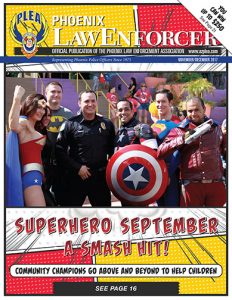