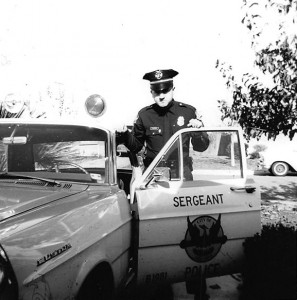 I was raised in Denver, Colorado, and I had wanted to be a police detective for years. I turned 22 in 1960 and was ready to join the police department. However, 60 Denver police officers had been sentenced to the Colorado State Prison in Canyon City over the previous few years for various felonies, many for pulling burglaries, safe jobs, etc., while on duty, in uniform, using police cars. So I looked to Phoenix and took the battery of tests for patrolman in June 1960. They included written, oral board, physical agility, medical and physiological. Captain Hershel Britten subsequently sent a letter inviting me to start the five-week recruit school beginning on August 22, 1960. I sold my house, quit my job and with very few dollars, drove my wife and two small children in my 1950 Oldsmobile (no air conditioning) to Phoenix, where we rented a very small one-bedroom house for about $65 a month. It had no AC, but was equipped with an evaporative cooler.

When I reported for duty, they advised that I couldn’t be hired without passing a polygraph test, which had been added after the tests I took in June. I sweated even more as Sergeant Charles Strong administered it, but I passed. The Academy class was held in a little house converted to a classroom on land where the present Academy is located. (The old Quonset hut was used as a storeroom then.) There were 33 in the class, and I think our pay was $345 a month with no overtime. Any work over 40 hours could be used later as compensatory time. There was no uniform allowance, but we were issued hat and breast badges, a used .38-caliber revolver, a gun belt with holster, handcuff and bullet cases, handcuffs, a sap and a flashlight. We bought our uniforms at a shop on the west side of Central Avenue, just south of Van Buren Street. (I think a guy named Thew ran it.) The uniform was dark blue wool trousers with two narrow sap pockets below the rear pockets for the sap and/or flashlight, a long-sleeved dark blue wool shirt for winter, a long-sleeved light blue cotton shirt for spring and fall, and a short-sleeved light blue shirt for the summer. We wore black clip-on ties, and hats were required when out of the patrol car.

The patrol cars were equipped with two buttons on the floorboard, one to dim the headlights; the other activated the siren and a knob on the dash was pulled to stop it. There was one radio frequency for the north side, one for the south and one “chase” channel for emergency traffic. Of course, portable radios were unheard of. Unless it was an extreme emergency, we drove to a pay phone and received our nickel or dime back when we called the City operator, who transferred us to the I-Bureau or MVD for registration and warrant checks. Our cars had no air conditioning until Studebaker Larks were purchased in the early 1960s, but not everyone got one right away.

We had no copy machines, and long-form departmental reports were typed by a clerk on premade packages, each made up of about six thin pages of different-colored paper separated by carbon paper. We wrote a report for every call: a short form, 5.5 by 8 inches, if it didn’t amount to much — such as when the complainant or activity was gone on arrival — and a long-form report if it was a serious matter. It was tough keeping the sweat off the paper while writing in the car with no AC in 110-degree heat. A worksheet was completed indicating all activity, and we were expected to write traffic tickets every shift. It was not a quota, but everyone knows that violations occur everywhere, every day.

Drunk drivers were taken to 17 S. Second Ave., where a civilian named Mr. Jones, who was contracted by the Department, was called in, day or night. He ran the breathalyzer, or whatever it was called then. If the drunk refused to blow in the machine, we strapped them in a big wooden chair and held their head until they exhaled into a cone-shaped device held to their mouth by Jones. Anyone arrested had to spend six hours in jail before being bailed out. They went to court the morning after their arrest, in a courtroom on the first floor of 17 S. Second Ave. That’s the courtroom where I first testified before Judge Pensinger on a red-light ticket I wrote. The judge had his eyes closed for part of the testimony given by the defendant, and I thought he may have dozed off, but he was probably concentrating on what was being said. She was a schoolteacher whom I had observed talking to several other women in her car as she drove through a red light. The judge found her guilty, informing her that I wouldn’t have written her a ticket unless she had run the light.

Phoenix had annexed south #9444 of the river bottom in June 1960, and many residents living there didn’t like it. After field training, my first beat riding solo was south of Dobbins Road, consisting mostly of South Mountain Park, which was dead on the 11 p.m. to 7 a.m. shift. I first worked out of 17 S. Second Ave. or a storefront on the 100 block of West Jefferson Street, and later moved to a substation in the shopping center at Central Avenue and Roeser Road. Each shift consisted of a captain, a couple of lieutenants and their sergeants and patrolmen. The entire shift, from captain on down, changed from day to night to afternoon shift every two months, except once a year when we rotated after only one month. This was done so that no one would be stuck working the same hours during the same summer months or holidays year after year. I personally liked this arrangement because of the variety of work the three shifts provided. We reported to work half an hour early for briefing, for an eight-and-a-half-hour day.

Later, I was transferred to a relief squad where we worked the squad area south of the river bottom, west of about Seventh Street on Tuesdays and Wednesdays, then east of about Seventh Street on Thursdays and Fridays. This included 24th Street and Broadway Road, which at the time was called “Bloody Broadway.” There were very shabby bars and nightclubs, such as the Blackcat Walk-in, located there. We could always depend on a shooting or cutting on Friday nights. Broadway and 24th Street were the only paved streets in the area; all the surrounding streets were dirt, and there always seemed to be a lot of dust and dirt in the air. On Saturday night my squad worked the Downtown area, including the Duce. We had a two-man paddy wagon, which was a truck with a big metal box that held about 16 prisoners. We enforced the drunk-and-disorderly and vagrancy laws, so anyone found drunk or laying around on sidewalks or streets was picked up and booked, and we usually took several prisoner loads to jail on Saturday nights.

When I came on, we didn’t get any sick time off for six months. I got sick that first winter of 1960 and couldn’t afford to take off. My partner brought me to Memorial Hospital Emergency, where most of our business went unless someone went to the County Hospital. The lovely nurses there gave me a shot — no paperwork, no charges and I managed to get by without missing work. (I became ill another time after that, and Officer Edna Hurt, who was assigned to our jail, gave me a shot. Again, no charge, no paperwork.)

Speaking of the County Hospital, in 1960 it was located just off 35th Avenue around Durango, and was terribly antiquated and overcrowded. I remember bringing a prisoner there for treatment one night. The treatment and waiting areas were basically the same room and very small. When I came into the room with my prisoner, I saw that a doctor and nurse were working on a patient on a table behind a drape that separated them from the people in the waiting room. A drunk man on his hands and knees was trying to crawl under the drape, telling medical staff he wanted treatment, and the nurse was pushing him back out with one leg while assisting the doctor working on the patient on the table. Of course, I pulled the guy back and sat him down, telling him to wait his turn.

Being a pretty good shot, when we came on the day shift, 7 a.m. to 3 p.m., I was frequently called to the front desk, where the desk sergeant handed me a .22 rifle, a box of graphite bullets and a list of addresses where people had complained about pigeons. In full uniform, I went to the addresses, shot pigeons out of the palm trees and put them on the back floorboard of my police car. I took them to the City shop at 13th and Washington streets, and one of the City employees there took them home for several dinners.

Phoenix had its own jail on the top floor of 17 S. Second Ave., and a compound just south of Sky Harbor Airport where the prisoners served their time. The compound had a farmer who supervised a large garden where prisoners raised their own crops. A cook or cooks supervised the preparation of meals. They made great-looking cinnamon buns, which we were told had been baked with saltpeter. Officers didn’t eat them. The prisoners wore clean, pressed uniforms, and besides doing the farm and cooking work, they were assigned various details around the police station, City Hall, etc. They served their 30 days or so and were released back out on the street, where they got drunk and were arrested again. They all were given good medical care and many cycled their lives out that way. On the day shift I also remember getting calls to the jail to transport both men and women prisoners to the County Health Department located around 17th and Roosevelt streets, where they were treated for various venereal diseases. (I had to go to that same facility in about 2006 to get shots for a trip to Africa. It looked the same as it had long ago and brought back old memories.)

One of the first arrests I remember making while with my training officer was when we were called to a motel around Central Avenue and Broadway Road by an angry woman who reported that her husband was there with another woman. We arrested the husband and his girlfriend. I think they were charged with some code about being naked in the company of a person of the opposite sex, or possibly the “open and notorious cohabitation” law. I can’t recall which one, but they went to jail! (If you’re interested, I still have a copy of a 1960s legal opinion by the County attorney describing the elements needed to arrest for open and notorious cohabitation.)

I was promoted to detective in the summer of 1964, which meant a $40-a-month raise and a detective shield. We worked Monday through Friday, 8 a.m. until 5 p.m., but were occasionally assigned to work weekends, 8 a.m. to 5 p.m. All detectives worked out of the main station at 17 S. Second Ave.

Editor’s note: Jim Humphrey retired from the Phoenix Police Department in January 1991 as a major. 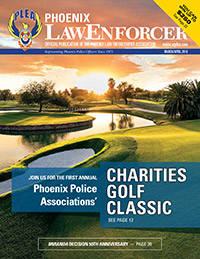