On March 12, we had our third annual picnic hosted by the Retired Phoenix Police Officers/Dispatchers for the purpose of reconnecting, having a great time and supporting our Phoenix Police Museum.

At the first picnic held in 2014, 225 folks showed up. This was astounding because I only expected that, at the most, maybe 60 to 80 people would show up for a first-time event. The second year approximately 280 people showed up, and this year we had an amazing 295 retired and current Phoenix police officers, dispatchers and family members in attendance.

The raffle was stupendous, with donations of a beautiful blue fox fur coat; airplane rides; glider rides; massages; gift certificates for restaurants, casinos, movies and baseball games; and a new leather motorcycle jacket. We also had artwork sent by retired officers, books authored by retired officers, and wonderful selections of wines, whiskeys and tequilas. Thank you to everyone who donated!

Of course, a huge hit was the one-of-a-kind commemorative M1911 pistol donated by our own very generous David Lane. This particular M1911 was designed by Dave and built by Frank Glenn. Frank is a retired DPS armorer. Steve Proctor donated a Ruger 10/22 rifle.

Chief Joe Yahner attended and greeted some of our retirees with three-digit serial numbers, many of whom came from out of town to attend the picnic. We had attendees from Missouri, Arkansas, California, Texas and from all points in Arizona.

As an added treat, on Sunday, March 13, the day after the picnic, Rob Demlong opened the Phoenix Police Museum for a special retired-officers-only open house. This was greatly appreciated, especially by the many retirees who attended from out of state.

All totaled, $11,755.55 was raised and donated to our legacy, the Phoenix Police Museum. Please keep in mind that the Retired Phoenix Police Officers/Dispatchers Facebook group is not affiliated with the Association of Retired Phoenix Officers (ARPO), PLEA, Fraternal Order of Police (FOP) or any similar organization. Because there are no affiliations, we have no membership dues, no elections, no meetings, etc. All we have is a love for one another and a willingness to help our fellow retirees, which makes it even more amazing.

The retired officers, dispatchers and spouses who worked so very hard on making this a huge success are as follows.

Raffle Committee: Chairs Sara and Bob VanHouten and members Karla Clark, Toni Brown, Peggy Mecham Milsap, Eunice Scott, Nan and Cave Golding, and Lou and Peg Martinez. The committee came out early on the morning of the picnic #4567 to help set up. Thanks to all of you and those who donated items for a great cause.

Gun Raffle Committee: Martha and Steve Proctor. Martha also designed and made our picnic flyer and the tickets for the gun raffle.

We look forward to seeing you at next year’s event and will keep you posted as we plan things out. 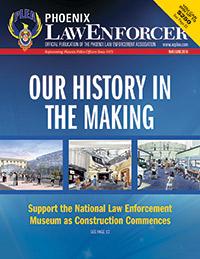