The Supreme Court has held that the Fourth Amendment prohibits law enforcement officers from using excessive force when apprehending a suspect or making an arrest. Under 42 U.S.C. §1983 such a violation means that officers who use excessive force are subject to civil liability. Qualified immunity provides protection from civil lawsuits for law enforcement officers and other public officials. The doctrine recognizes the need to protect officials who are required to exercise their discretion and the related public interest in encouraging the vigorous exercise of official authority. But, qualified immunity is not absolute immunity and there are situations in which a public official can be held accountable for constitutional violations in civil court. “[Q]ualified immunity protects ‘all but the plainly incompetent or those who knowingly violate the law.” Mullenix v. Luna, ___U.S.___, 136 S. Ct. 305 (2015) (quoting Malley v. Briggs, 475 U.S. 355, 106 S. Ct. 1092, (1986)).

The longstanding two-part test the Courts use to determine whether qualified immunity applies requires an analysis of: (1) Did the officer violate a constitutional right? and (2) Did the officer know that their actions violated a “clearly established right”?

While the doctrine of qualified immunity has not been codified by Congress in legislation, the Supreme Court has revisited the issue in several cases over the years and has previously signaled endorsement of the public officials’ liability shield. In addition to the recognized common law doctrine, qualified immunity has been codified by the Arizona legislature in A.R.S. §12-820.02 and A.R.S. §13-413 (no civil liability for justified conduct).

Kisela v. Hughes — Expanding Entitlement to Qualified Immunity in Use of Force Cases

On April 2, 2018, in Kisela v. Hughes, 584 U.S. ___, the United States Supreme Court overturned a Ninth Circuit Court of Appeals decision in favor of a woman who had been shot and wounded by a law enforcement officer in Tucson, Arizona. In doing so, the Court held that the officer was entitled to qualified immunity because the incident was far from an obvious case in which any competent officer would have known that it violated the Fourth Amendment.

In May 2010, three officers responded to a 911 report that a woman was acting erratically and hacking at a tree with a large kitchen knife. Upon arrival, the officers observed a woman standing next to a car in the driveway of a nearby home. The officers were separated from the woman by a chain link fence. Another woman exited the home carrying a large knife at her side. This woman, later identified as Amy Hughes, matched the description provided by the 911 caller. Hughes approached the woman in the driveway and stopped approximately six feet away.

At this point, the officers drew their guns and twice ordered Hughes to drop the knife. Although Hughes appeared calm, she did neither acknowledge the officers’ presence nor dropped the knife. Without additional warning, one officer dropped to the ground and shot Hughes four times through the fence. The entire incident lasted less than a minute.

The Court explained that “[q]ualified immunity attaches when an official’s conduct does not violate clearly established statutory or constitutional rights of which a reasonable person would have known” and cautioned against lower courts defining “clearly established rights” too generally. For a right to be clearly established, existing precedent must have placed the constitutional issue beyond debate. In the context of use of force cases, “[a]n officer ‘cannot be said to have violated a clearly established right unless the right’s contours were sufficiently definite that any reasonable official in the defendant’s shoes would have understood that he was violating it.” Thus, “police officers are entitled to qualified immunity unless existing precedent ‘squarely governs’ the specific facts at issue.” The Court found that the Ninth Circuit had failed to apply this portion of the standard correctly.

The Court considered the standard in light of the following facts:

Given those facts and the lack of precedent with a sufficiently similar fact pattern, the Court concluded that this was “far from an obvious case in which any competent officer would have known that shooting Hughes to protect [the third party] would violate the Fourth Amendment.” Accordingly, the Court held that the officer was entitled to qualified immunity and reversed the Ninth Circuit’s decision.

It should be noted that not all justices agreed with the majority’s decision to reverse. Justice Sotomayor authored a strong dissent, joined by Justice Ginsburg, asserting that the ruling “is not just wrong on the law; it also sends an alarming signal to law enforcement officers and the public” that officers “can shoot first and think later.” Justice Sotomayor’s disagreement centered on the “clearly established” standard. In her view, the majority placed too much emphasis on there being a factually identical case. Rather, she wrote, “[i]t is enough that governing law places ‘the constitutionality of the officer’s conduct beyond debate.’ Because, taking the facts in the light most favorable to Hughes, it is ‘beyond debate’ that [the officer]’s use of deadly force was objectively unreasonable, he was not entitled to summary judgment on the basis of qualified immunity.”

So what does this decision mean for you? Kisela provides additional support for the principle that law enforcement officers must have knowledge that their actions would violate the Fourth Amendment before they can be held liable for a use of force incident. Unless a factually similar case #10032 existing before a use of force incident demonstrates that your actions were clearly unconstitutional, you would likely be entitled to qualified immunity. This ruling, thus, will likely be helpful in defending officers sued civilly for uses of force. This ruling does not, however, affect the Department’s ability to discipline you for any policy violations arising out of a use of force incident. Thus, it remains imperative that you contact PLEA if you are involved in a use of force incident. PLEA representatives and the attorneys PLEA provides will ensure that you understand all possible criminal, civil, and administrative implications.

As always, if you wish to discuss this case or any other matter affecting your employment, please feel free to contact PLEA’s attorneys at Napier, Coury & Baillie, P.C.: (602) 248-9107 or napierlawfirm.com

Eric Reginald Wilson is an associate attorney with Napier, Coury & Baillie, your law firm and the most experienced firm in protecting your rights. He earned his Bachelor of Science in environmental studies from the University of Nebraska–Lincoln in 2008 and his Juris Doctorate from the University of Denver Sturm College of Law in 2012. Wilson represents clients in various administrative, disciplinary, and other labor and employment-related matters. 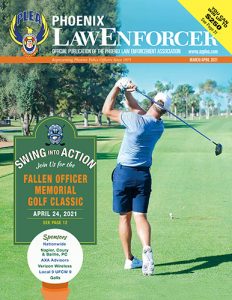