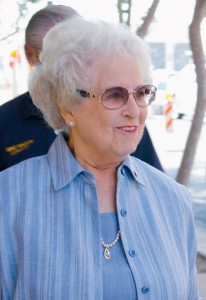 In February, I had the opportunity to meet Emma Groom and interview her at her home in the Valley.

Emma was born in Wisconsin in 1920. It was a nice, warm day in 1956 when she stopped with her four young sons at a café near the Arizona Capitol to have lunch. As rowdy as young boys can be, one of her sons grabbed the hat belonging to the man in the booth behind them. Emma said she took the hat from her son to keep him from getting “sticky” fingers on it. She placed it on her own head to get it out of the child’s reach.

The owner of the hat, Phoenix Police Chief Charlie Thomas, looked at Emma and told her he had hats that would look much better on her then his. Chief Thomas invited her to come into his office at the police station for a job interview the next day. That meeting changed her life.

After a short interview with the Chief, Emma was hired and started her career as a jail matron. Her job consisted of accompanying the doctor on his rounds of jail inmates and making sure they took the medicines prescribed. She had a 60-day probationary period and no formal training. She worked at the jail for only a few months before she was assigned to traffic detail.

Emma enjoyed writing parking and traffic tickets. She was also assigned to direct traffic at Central Avenue and Adams Street. Emma recollected that there were several women who “worked the area rolling drunks.” She believed one of them was an Eskimo lady, and she recalled their names as Jeri White, Ella Legg and Boots Wagner. One night, the three women were in a quarrel, and after they were arrested, Emma was called to search them. Boots Wagner bit Emma’s arm during the search, and that was the only time Emma was injured on duty. Emma remarked on how “times have changed” for officers being injured.

In 1965 or 1966, Chief Larry Wetzel assigned Emma Groom to the detective division. Emma retired from the Phoenix Police Department after 20 years of service, and although there were no other law enforcement officers in her family, her second-oldest son eventually became a Maricopa County adult probation officer after starting in Globe, Arizona.

When asked about regrets, Emma remarked that she really enjoyed her job, but she did have one regret. A woman came into the station to report that her 8-year-old daughter had been sexually assaulted, and the suspect, a teenager, was known to the victim. During the suspect interview, the suspect had an attorney with him and was told not to say one word. The suspect’s mom and dad also gave him an alibi. The suspect was never charged for the sexual assault of the child. After the suspect became an adult, he was being sent to California to answer for either a murder or attempted murder charge. Emma happened to speak with the suspect before he left, and he apologized to her. He said that he had really wanted to talk to her during that original interview, but his attorney would not let him. She told me that both she and the suspect regretted the fact that he did not speak to Emma then, as perhaps his entire life may have changed for the better.

Emma grew tired, and we agreed to meet on another day for lunch because I had so many more questions. Sadly, we were not able to continue our conversation, but I am fortunate to have spoken with this remarkable woman who holds a special place in Phoenix Police Department history. 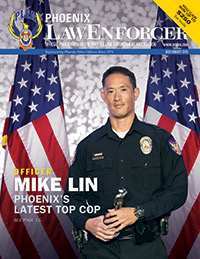