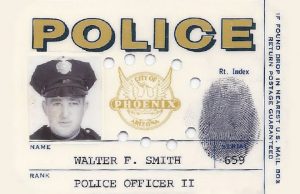 I was on the Douglas Police Department in Douglas, Arizona, from 1955 until 1959 and decided to apply for the Phoenix Police Department in the latter part of 1959. At that time, you did a physical fitness test, then made the choice of being a fireman or a policeman, followed by the written and oral tests after you made your decision.

I was hired in November 1959 and was issued serial #659. I attended the Academy for a couple of weeks, then was assigned to direct traffic during the Christmas season in downtown Phoenix. At that time, there was only one mall, Park Central, so most of the shopping was in the Downtown area. During my assignment, I could not believe the amount of traffic and the drivers’ total disregard for my traffic direction. A large percentage of them did what they wanted to, regardless of my efforts, then to compound matters, it began to rain! After the first week in the rain, I came down with the flu, but declined to take off work, as I was afraid I would lose my job! 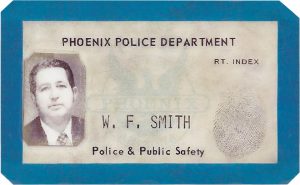 After this assignment, I was assigned to the Traffic Bureau, where I rode with a training officer. After a couple of weeks, I was cut loose on my own. At the time, the Phoenix Police Department had about 350 or so officers. Our patrol cars had no air-conditioning or seat belts. We did have a two-way radio, but once you left the vehicle, you had no communication with the station. Cellphones were unheard of, and we did not have portable radios, either. Our uniforms were all wool and hot during the summer.

During my time in the Traffic Bureau, I was given several special assignments, one of which was in an unmarked car chasing speeders and street racers up and down Central Avenue. That was a very interesting assignment, as there was a lot of activity on Central Avenue in the 1960s. I was then assigned to the hit-and-run detail, where one of my duties was to work all of the serious injury and fatal traffic collisions.

I remained in the Traffic Bureau until July 1961, when I was transferred to the General Investigations Bureau as a detective. I performed all the regular assignments as a detective, and then I was assigned to the burglary detail. While assigned there, I was told it would be a permanent assignment, meaning I did not rotate shifts or details. I was designated as a training officer during my tenure in the burglary detail, and I trained many officers who went up the promotional ladder. I was content to stay on the street, and took the sergeant’s test one time due to an order from the Chief that everyone eligible had to do so. I just signed my name and turned in the blank test. I became the first and only (to my knowledge) safe burglary investigator on the Department. This subjected me to 24-hour on-call duties where I earned a lot of overtime. I encountered many interesting suspects during this assignment, both local and from other areas. 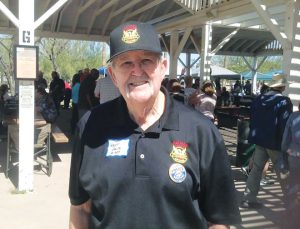 Later on, I was assigned to a special squad that was formed, the Felony Squad, which entailed going undercover and investigating any major felonies assigned to the detail. Upon completion of that assignment, I was transferred back to the burglary detail, ending up at the Union Hills Precinct until I retired in April 1985. In total, I spent about 25 years as a burglary detective.

After being retired for about six months, I was asked to work in the Internal Affairs division of the Arizona Department of Corrections. I accepted their offer and put in five more years as an investigator/supervisor.

In 1990, I decided to retire to Strawberry, Arizona, where my wife and I already owned a cabin and she had contracted building a home while I was with DOC. We lived there for about 25 years but due to my wife’s health issues, we returned to Phoenix in 2013.

Looking back at my law enforcement career, I feel that I was very fortunate in that I was only involved in one shooting incident and suffered no serious injuries. I met a great bunch of people, mostly on the Phoenix Police Department. I served as a patrolman, traffic officer, acting sergeant in traffic and burglary, detective and supervisor. In addition to the many interesting experiences during those 35 years as a law enforcement officer, I watched the city grow from a mid-sized town to a large city with freeways, large buildings and major population growth. 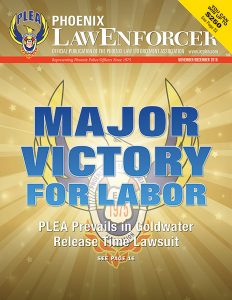