Len, 71 years old, passed away December 6, 2013, after suffering from Parkinson’s disease for several years. Len was a Phoenix police officer for more than 25 years and worked as a burglary detective at North Resource Bureau and Squaw Peak Precinct. Len is preceded in death by his wife of 43 years, Diane, and he leaves behind two daughters and three grandchildren. Services for Len were held December 12, with burial at Phoenix Memorial Cemetery.

The “700” Detectives were known for their practical jokes and Lenny was usually on the wrong end of these jokes. Many times Len would have to field phone calls from strangers wanting to buy his personal truck after it had been suspiciously moved to 16th Street and Bethany Home Road, with a for sale sign and a ridiculously low price.

You will be missed, Len.

December 9, 2013, marked a first for the Phoenix Police Department. With heartfelt thanks to Chief Garcia and his staff, and with accolades to organizer Sergeant Jamie Rothschild of the Black Mountain Precinct, we were able to honor a retired Phoenix police officer.

Robert Harry Sparks, #3186, joined the Phoenix Police Department on July 26, 1976. He eventually promoted to the rank of lieutenant and his last assignment was Squaw Peak Precinct, now called Mountain View. Bob served with pride and integrity and retired after about 35 years of service. Bob didn’t stay retired long before he accepted employment at the Arizona Motor Vehicle Services department as chief of enforcement. Bob also stayed on the Department as a reserve officer, R1043, where he was assigned to the Violent Crimes Bureau’s Robbery Unit.

Bob had been diagnosed with pancreatic cancer and was put on hospice care at home in early December 2013. Bob was married to Shelly Locarni, daughter of Phoenix Police Officer Jack Locarni, and Bob has two daughters and a 95-year-old mother. Besides immediate family, Bob has many, many brothers and sisters among his fellow Phoenix police officers.

An idea was born, with the help of Sergeant Rothschild, Sergeant Phil Roberts, and several other officers, to pay tribute to Bob and have him see how much he was loved and respected while he could still appreciate it. Paying tribute to Bob now, they realized, would not only be a great memory for him, but would be a comfort to his family. Word spread among officers and through our retiree social network on Facebook. Plans were made and with the help of the Department, a procession was formed to drive in front of Bob’s home. Thirty-seven motors and 40 marked units drove by as Bob stood and saluted. Bob was very weak but very determined to stand and salute the officers who had come to show him love and respect; to show him that his life as a Phoenix police officer was special and worthy of recognition. Perhaps this is best summed up by the words Phil Roberts wrote on our retiree Facebook group:

An incredibly loving tribute to a friend. This morning the Department which Robert Sparks loved so much had the honor of loving him back. Dressed in full police uniform, Bob Sparks watched as a motorcycle and patrol vehicle procession drove past his home complete with a helicopter flyover. Many of us fought to hold back tears as Bob, in a very weakened state, stood and saluted us as we saluted him. Current and retired Phoenix police officers, Mesa Police Chief Frank Milstead, Department of Public Safety and ADOT enforcement officers were all present to pay homage to our friend.

Sadly, Bob lost his battle with cancer three days after this event. Rest in peace, Bob. 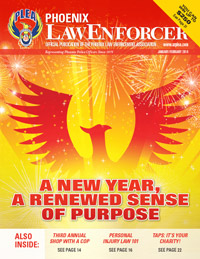