My September/October 2014 article concerned the largely held belief among retired members of the Phoenix Police Department that retirees are basically — shall I say it again? — not relevant.

I cannot tell you how many retirees, including me, believe that once you walk out of 620 West, you are completely forgotten by the Department — that is, until you die and then suddenly the Employee Assistance Unit does reach out to the family. But wait! Isn’t the Department missing the boat and not seeing the bigger picture? In today’s world, retirees are living longer than ever. Retirees still have a lot of skills, talents and abilities, and if the Department were to harness them, it could certainly be a win-win #4470 for all concerned.

Just recently, and for the first time of which I am aware, retirees were invited to speak at a retreat of Family Investigations Bureau [FIB] supervisors. Sergeant Lisa Gilligan, the administrative sergeant in FIB, contacted me several months ago asking if I knew of any retirees who could give a short presentation on important issues such as:

These are all topics that officers who are a few years away from retirement should be seriously considering and thinking about.

When I posted a request for volunteers on our Facebook group, Sergeant Gilligan was soon overwhelmed with retired volunteers. Retirees Dick White, Jim DeLung, Cindy Kralovetz and Geo Richards gave short but entertaining and informative presentations.

Several days after the retreat, Sergeant Gilligan contacted me to let me know the attending supervisors had been surveyed and 100% found the retirees’ information to be valuable.

The retirees’ presentations at the seminar were, in fact, so well received that she and her commander, Mike Parra, are hoping other units in the Department will consider holding retreats and inviting retirees to participate. I hope so, too. This would be a win-win for everyone.

Thank you, Sergeant Gilligan and Commander Parra, for recognizing that retirees are still valuable members of the Department. 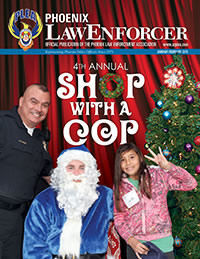