If you have not yet joined the Retired Phoenix Police Officers Facebook group, please contact me at Joyce15448@aol.com or Al Contreras at zorro2705@yahoo.com. You will not find the group on a search engine and because it is a closed and “secret” group; the only way to join is by requesting an invitation. There are lots of pictures of the old-timers and old Department photos that 514 members now enjoy. The criteria to join are to have 18 years or more on for current Phoenix police officers, or to be a retired police officer or retired Phoenix police dispatcher.

In May, Ron Bates hosted a tour of a very exclusive collection of vehicles owned by Ron Pratte. This collection will soon be going on the block at the Barrett-Jackson auction. One of the pristine vehicles is the only remaining 1966 Shelby Cobra Super Snake. The vehicle belonged to Carroll Shelby and last sold for $5.5 million. Approximately 15 retired officers from the Facebook group attended this viewing and had a great time.

The next (second) annual Retired Phoenix Police Officers/Dispatchers Picnic is scheduled for March 7, 2015. If you would like to assist the raffle committee, please contact Fran Anatra at (602) 819-6655, and if you have gift certificates, etc., that you would like to donate, send them to her at P.O. Box 5280, Peoria, AZ 85385. Anyone who would like to help sponsor rental of the ramadas, or have your business sponsor a rental, please contact me at Joyce15448@aol.com or (623) 465-9569. Steve Proctor will be organizing the gun raffle.

There are three breakfasts held statewide for us old retirees:

Gary Gardner, #1370, is in the Vista Mesa Assisted Living Home, 1206 N. Mildred Ave., in Cortez, Colorado. Gary has had Alzheimer’s for some time and can no longer carry on a conversation. He remembers faces and still has his humorous actions, but is limited in activity. He is physically strong and walks a lot on a track they have on premises. He loves visitors, so any of you who know him and are in the area are encouraged to stop by.

Officer Gary Hinkle, #1846, EOW May 24, 2014, from injuries received in a motorcycle collision the week prior. Gary joined the Department in 1969 and retired in 1993. Gary’s wife, Kathy, is still in the hospital with numerous broken bones but will soon be released to go home. 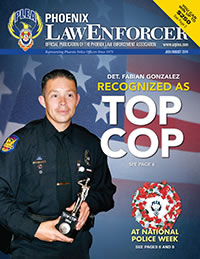