Retirees’ Corner is dedicated to those who served proudly as Phoenix police officers protecting their community.

Because of publication deadlines and mailing dates, by the time you read this, we will have had our first-ever
Retired Phoenix Police Officers and Dispatchers (and family) picnic on March 8, 2014. The invitation included active Phoenix police officers who are due to retire in the next few years. We held a raffle with an award for the lowest serial number present. On behalf of all who attended, a special thank-you goes out to Fran Anatra and Steve Proctor for collecting items for the raffle. All proceeds were donated to the Phoenix Police Museum.

We will provide a complete update on our picnic, including photographs, in the May/June issue of the Phoenix Law Enforcer.

If you would like to become a member of our Retired Phoenix Police Officers and Dispatchers Facebook Group, please contact me at Joyce15448@aol.com and an invitation will be sent to you. You will need to set up a Facebook account prior to accepting the invitation. It is a “secret” group not found via search engines and you must be invited to join. Any active Phoenix police officers or dispatchers with 18 years or more of service (looking toward retirement) may also join. This is the one way we have of keeping up with one another regardless of what city, state or country we retire to. There are lots of stories of radio calls, photos and reconnecting with old friends. Richard Bequette, #920, posted an interesting article this month on obtaining LEOSA permits to carry concealed weapons in other states. Dick White, #990, posted great old photos and memories of early days on the Phoenix Police Department. Manny Cota, #3682, Ron Bates, #1968, and so many others shared fantastic memories with the group, which is now 501 members strong: Ken Dubois, #3103, was lucky number 500 to join and Manny Cota is
number 501.

Best wishes to “Max” Braden, #1345, who is recuperating from illness in Idaho and to Mark Heimbigner, #2123, who is on the mend list in Sun City, Arizona. Congratulations to Ed Kiyler, #435, who had one grandson graduate
from the Academy this year and has a second grandson who will begin the Academy in March 2014. Both of them are with the Arizona Department of Public Safety.

Gordon Selby, #372: Gordon was the model for the Arizona Peace Officers Memorial, and retired Phoenix Officer Gordon Hunsaker wrote about him in the book Gunfights and Gunfighters.

Chuck Kessler, #2414: Passed away on January 29 in Scottsdale, Arizona. 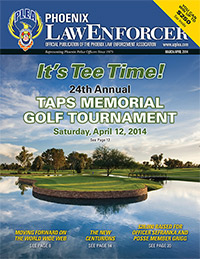