“The best prophet of the future is in the past.” — Author unknown

On Sept. 28, 2013, Phoenix Police retirees were treated to an open house at the Phoenix Police Museum. Approximately 63 retired Phoenix Police officers and their families attended, many for the first time. Highlights included a continental breakfast and a great tour of the old jail given by Carroll Cooley and Leo Speliopoulos. Thanks to all the museum volunteers: Mike Nikolin, Tom Schmultz, Wayne Bensfield, Bob Demlong and Linda Schall, as well as Carroll and Leo.

It’s not too early to put on your calendar…. March 8, 2014, will be the first-ever annual retired officers, dispatchers and families picnic!

This event has been planned well in advance so out-of-staters can obtain really cheap airline tickets. It will be held at Sahuaro Ranch Park, located at 9802 North 59th Avenue in Glendale, Ariz. The event begins at 11 a.m. and continues until whenever, and we have obtained a beer permit.

We plan on holding a raffle for some coveted police and non-police items. If you are interested in contributing items for the raffle, please contact me at (623) 465-9569. So far our contributors for the raffle include Steve Proctor, Tony Boynton, Wayne Stadler and Al Nordeen. We could use more items and all proceeds from the raffle will go to the Phoenix Police Museum.

With the help of John Augustyn, President of the Association of Retired Phoenix Police Officers (ARPO), we have rented two large ramadas with grills. Since this is our first-ever reunion of retired folks, we are doing it BYOB and BYOF — bring your own beer and bring your own food — a true picnic. This will be an historic event that you do not want to miss.

Our Retired Phoenix Police Officers and Dispatchers Facebook group is still growing by four or five members a week. This has been a fantastic vehicle for reconnecting with one another and sharing old stories, memories and photos. Sometimes a retiree may need a little help, a visit or maybe a phone call from an old friend. This is what members of this group can do: reach out, officers helping officers. We share the most beautiful thing…a Phoenix Police badge with the well-earned word “retired.” 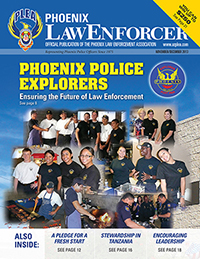