A member recently posted a story to the Retired Phoenix Police Officers Facebook group written by Sergeant Phil Jones, of the Washoe County (Nevada) Sheriff’s Office. The essay was written in the first person and it is meaningful to me for a number of different reasons.

The article is entitled “K9 partners: Why we need those ‘old dogs with badges,’” and it can be found on Police One’s website. In it, Sergeant Jones describes sitting in his front yard with his K9 partner when a stranger walks by. Sergeant Jones notices the dog watching the stranger in a not-so-friendly manner. A friend who is sitting with him makes a comment about how sad it is that the dog was a police dog instead of a “normal” dog. From that point, the author thinks of the things his old dog has missed out on by being a police dog. Certainly he missed social gatherings because of callouts or having to work overtime. The dog is much more comfortable in smaller groups and is very uncomfortable when people are behind him. He prefers to face them and read their intentions. He does not like strangers ringing the doorbell late at night.

Some nights he had to have a bath before leaving work because some of the places he had been were too filthy to track into his family home. Often, after working a long night shift, he would sleep the next day away. And often days and nights ran together.

The hot tone on the police radio always excites him, and he’s seen more illegal drugs than most people even know exist.

Sergeant Jones ends his story by writing the following: “He has been on the front line hunting real evil — not for the pay, but because it is what he signed up to do when he was a young cop with a badge…. We are just a couple ‘old dogs with badges.’ If we could do it all over, neither of us would change a thing.”

What I especially like about the story is how it points out that on or off duty, no matter how hard you try, you can’t turn your training off. The #9006 same goes for retirement. Once you retire, you may not be on the front lines any longer, but your training and life of 20-plus years does not leave you.

It’s almost time for our second annual Phoenix Police Picnic, which will be on March 7, 2015, at Sahuaro Ranch Park in Glendale. This year we have rented a third ramada due to last year’s large turnout, and a special thanks goes out to PLEA for the donation to secure it. Please mark the date on your calendar, because it will be here before you know it — trust me. More details to follow. 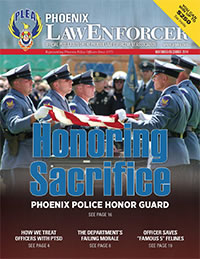