As a recent retiree looking back at my career with the Phoenix Police Department, I am proud of the agency I worked for and the good we did. Despite everything I went through physically, mentally and emotionally, I would not trade my experiences for the world.

With morale lagging and headlines dragging our reputation through the mud, this article is for those who know they are doing “20 and a day,” those deciding whether to just pack it up and go, and also those who have to leave because their DROP is ending. The purpose of this is to give you something else to consider as the door to the end of your career nears and then closes.

When our career is done, each of us should be able to say, “I worked in a high-stress, high-volume and high-stakes environment for longer than most would have endured.” We did and we have. Every single one of us has at one point or another worked in patrol or in a specialty detail that has exposed us to some sort of violence or trauma.

Over a decade ago, the Department recognized an “issue” with those of us who lived to be in the moment of what I termed “the blood, guts and gore” of “real” police work. For me, being there at the shooting scenes, the homicides, the serious or fatal collisions, was not so much to see and experience the violence, but to give me the fuel and drive to ensure I could hunt down those responsible for the evil and bring them to justice. Some of us have also been personally involved in critical incidents.

The Department knew this constant exposure could be a problem, but did not know how to label it. They were initially more worried about Department liability if one of these officers “went too far” or “did something that would not pass the headline test.” They did not care about individual officers’ physical or emotional exhaustion, compassion fatigue or burnout. Yet they wanted to find a way to identify these officers so they could be talked to, “disciplined down” or taught to be “less aggressive.”

The system they created was called the Personnel Assessment System (PAS). You were rated on various factors: number of calls to violent scenes, number of arrests, race of the arrested, number of pursuits, “discretionary” arrests or citations issued, etc. For each section of PAS, you had a traffic signal icon showing you your status. If your light in the various areas was green, you were good — keep on keeping on. At yellow, you needed to have a sit-down with your boss and discuss if there were any “issues” with your performance. And at red — look out, you had to meet with your sergeant and lieutenant (with review of your recap, your overtime, your court, your use of leave and discussion of having any off-duty work permits pulled). In the late 1990s and early 2000s, I was a “6” car (or hot car) that did not have a specific beat responsibility in my squad area. I earned this role because I was one of the few third-shift, Northside Spanish-speaking officers. I also had training in advanced DUI enforcement and advanced traffic collision courses, was detective qualified, and was a 35mm (non-digital) camera operator. I was live scan/fingerprint trained and had training in biological evidence collection, when at that time, personnel now known as crime scene specialists were usually the only Department employees able to do these tasks. I was one of the first controlled substances officers when the program was started, was in the Department’s first officer-phlebotomist program, and was a drug recognition expert (DRE). Because of my penchant for pursuits, I was told to be on the Pursuit Policy Revision Committee under then-Assistant Chief Michael McCort. Due to my lack of beat responsibilities and my skills, I had earned many yellow and several red lights. Each month, despite the PAS alerts, I was told to keep doing what I was doing. So I did, and I did not realize the emotional and mental damage I was doing to myself along the way.

After a year or two, PAS, for all intents and purposes, went into general disuse. But before it did, I transferred to the old General Investigations Bureau as a detective. I noticed all my traffic lights slowly turned to green, despite the fact that every call I went on was a violent crime. This reinforced to me that this was an attempt for the Department to shield itself civilly from “problem Patrol officers” making a bad decision in a split-second situations. Using 20/20 hindsight, this could have been an early tool to recognize those who needed counseling, assistance or other help.

Sadly, during this time Phoenix rolled along with the national trend of police suicides and not talking about the issues causing them. My first exposure to the dark epidemic was when Brian Bauch, #7022, killed himself. I considered Brian a friend. He had many stressors in his life, but our “police culture” did not allow us to truly talk about it. There was nowhere on the Department to reach out to for help — or if there was, the way to find it was nearly impossible. Over the years, we have had many more officers commit suicide. Most of us on for any amount of time know of at least one or two names, several of us more. Sadly, there are many of us who can name retired officers who also succumbed to the mental injuries suffered on the job.

It wasn’t until about 2012 that I started to quietly seek help through the Department’s “12 free counseling sessions.” I started to see a counselor, as I was having issues coming to terms with being diagnosed with “PTSD symptoms.” To this day, I still struggle with that “label,” which should not be one. After a while, I understood that I should not be ashamed of my mental injuries and started talking to other officers about it. I know at least one other officer who found the courage to start seeking help for themselves after we talked. For them, it just took someone being able to tell them it was OK.

However, it took Craig Tiger, #7356, to shine a bright light on the problem of PTSD and policing in Phoenix. While the Department has made huge strides in the last few years, there are still growing pains in getting us the help we need. I was the first in Phoenix to try to apply for help through the Craig Tiger Act, HB 2502. Once the law was passed, I had to wait for paperwork to be written and approved — which took weeks. (It should be noted that the paperwork issue was well above the pay grade for Sergeant Jared Lowe and the Employee Assistance Unit [EAU] — they were great in getting me help until the paperwork came through!) In the meantime, I decided I was done with my Phoenix career for several reasons. I am one of the retirees who will tell you walking away was the best thing for myself and my family.

However, after I left Phoenix, many of the resources the Department is now offering current employees were no longer available to me. The jobs I have held since I retired have been less hectic and less stressful. The volume of work is considerably less. As another retired co-worker told me, “When we left Phoenix, it was not like we were slowing down; we were hitting a brick wall and are full stop.” But being in a less stressful environment with less volume has allowed more time for intrusive memories, thoughts and feelings to interrupt my daily life. The Tiger Act was a good start; however, that’s all it was — a start. I have left the job, but the mental injuries have not left me. Please, as you head out the door, ensure that you are ready for the transition.

So, for those of you who are approaching the end of your career for whatever reason, make your mental and emotional health part of your equation to stay or go. Make sure you have resources in place for yourself in case you need them. And for everyone reading this, please contact your elected officials and help make mental health treatment for first responders available to those who need it — active and retired. We sacrificed to keep our communities safe; it’s the least we can ask for. 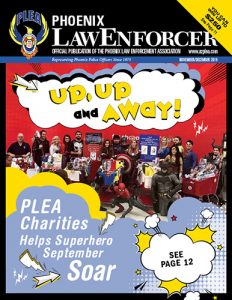