I think we can all agree that being a police officer with the Phoenix Police Department is challenging these days. The manpower crisis we find ourselves in, a DOJ investigation, the unrest in the chief’s office and the ever-increasing workload officers and detectives find themselves facing is unprecedented. Never in my time as a Phoenix police officer can I remember there being so many issues all at the same time.

I’ll start with the DOJ. There has been communication from the city manager’s office indicating that DOJ involvement in our Department is a positive thing. They tout that there will be increased training and equipment provided to the officers and detectives. While that may be true, there are massive changes that will also be put in place. I have been in contact with several organizations that represent officers from many jurisdictions that have currently or have had DOJ involvement. Everything from regular interaction with citizens to uses of force on violent suspects will be dissected by multiple entities. Paperwork and documentation will be absolutely mind boggling and will bog down an already arduous process. Internal investigations will skyrocket for the most routine of things that are now handled via blue teams.

The longer the decree is in place, the longer the monitor has a job. Tens of millions of dollars are at stake.

The burdens and scrutiny placed on line-level sergeants and lieutenants tend to be immense. If an officer or detective makes a mistake or commits what is perceived as misconduct, the supervisors are held to answer as to why they did not foresee the action taking place. The paperwork thrust upon supervisors might make you think twice about promoting.

In addition, there has not been one community that hasn’t seen an immediate increase in violent crime upon the implementation of a consent decree. The city of Phoenix is already on pace to set a homicide record. At the time of this writing, we have already experienced 133 homicides — a 21% increase from last year. In addition, 294 citizens have been wounded by gunfire in the first six months of 2022. I suspect this is just a glimpse of what is to come once the criminal element within our community knows that police officers and detectives are burdened with a heaping amount of paperwork that prevents good proactive police work.

On the topic of leadership: These days, it is unclear who is running the Department. I have been told that all operational decisions have to be approved by Assistant City Manager Lori Bays. If accurate, this should concern everyone in this Department and everyone in the community. I would be curious to hear what qualifies Bays, short of her job title, to run the police department in the nation’s fifth-largest city.

When Chief Williams announced her retirement earlier this year, the city manager almost immediately announced that he would be searching for an interim chief from outside the Department. I reached out to Jeff and expressed concern over an outside candidate.

It wasn’t that long ago that we had this occur with the infamous Daniel Garcia. For those of you who weren’t around during the DVG era, I will tell you his leadership style left a lot to be desired. There are plenty of us left who remember this time in our Department’s history and don’t want to take a chance of a repeat performance with someone new. Jeff told us that he was looking for someone who had DOJ experience and did not want to be the police chief permanently. He told us that it was for somewhere between 18–24 months. I mentioned to him that I knew of someone who fit within those parameters. Someone who had been in Phoenix police leadership prior to going to a new agency. Someone who had a love for the Department but was so happy in their current position that they would not want to be the permanent chief.

It was at this time a new criterion was expressed. The candidate could not have ever worked for the Phoenix Police Department. The rationale for this was if there was a need for an executive to be disciplined, he did not want any personal relationships to interfere.

I expressed to Jeff that we (PLEA) would like to be involved in the process as we have several partnerships and contacts around the country with police labor representatives and have the ability to hear how a person truly is as a leader that isn’t necessarily depicted in a resume. Jeff told me that he would give us the name once it is determined prior to a public announcement. It was apparent that the city manager and the assistant city manager did not want anyone involved in this process to find our next leader. As the labor organization that represents the largest number of sworn employees, you would think they would welcome our involvement.

Not only did he not want our involvement, he did not want the citizens involved either. Several individuals from the community we serve wanted to be involved in this process as well since it directly affects them. Many of these citizens are leaders within the community and represent large numbers of residents. Jeff was sent emails supporting an internal police department pick for interim chief. In those emails, community leaders asked to be involved. They were routinely rebuked and told their input was appreciated but assured them that they were going to make the decision keeping in mind the best interests of the Department and the community.

Fast forward to July 29 at 1025. Assistant City Manager Lori Bays called and informed me that she and Jeff had made a decision regarding the interim police chief and were getting ready to announce it publicly. This was approximately 10 or so minutes before the employee notification was sent out. Immediately, our membership and the media were reaching out for information and inquiring as to why we hadn’t released any information on the newly announced police chief. They were all informed that we had only just obtained the information and did not have anything to report.

Many questions have come up since the announcement. The biggest question is, why wouldn’t city leadership want to collaborate with the community or PLEA for such an important decision? There are at least four different labor organizations that represent employees that are directly impacted by this decision. To my knowledge, not one of them was contacted to provide input. It’s hard to believe Jeff and Lori wouldn’t want the input of the elected representatives of the employees. What about the community? In a time of “transparency,” this decision was made behind closed doors.

I do not know Michael Sullivan. This is absolutely not about him but the process that took place to identify him as our interim chief. For all I know, Sullivan might be one of the best chiefs Phoenix has ever had, and for our sake, I hope he is! He has some pretty big shoes to fill, considering some of our past chiefs.

I am concerned, as I think many others are as well, that moving forward, this exclusionary policy may become standard practice for the city manager’s office. And while I have been assured that PLEA and the community will be involved in the search for a permanent chief, being excluded from this huge decision of picking an interim chief does create concern. I hope that I am wrong.

In spite of all of the turmoil we are in the midst of, there have been numerous examples of outstanding police work being done by the men and women of this Department. The officers and detectives we all work with and around have continued to be consummate professionals and have not waivered in the commitment to the community we serve. Keep up the good work!

As always, if you have any questions or comments, I can be reached at the PLEA office or at dkriplean@azplea.com. 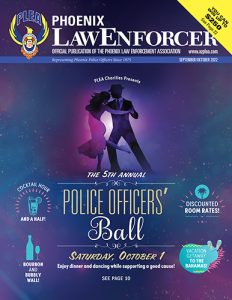