This has been quite a year for our Department, to say the least. We have been faced with a lot of adversity. I will try to put the past year or so into context.

As I am sure no one has forgotten, the DOJ pattern and practice investigation is still ongoing. Rumors are aplenty regarding this issue, and I’m not sure anyone really knows where they are on that, as they don’t seem to be very forthcoming with information. What I can say is to keep doing your job the way you always have, professionally and honorably.

In these past 12 or so months, we have seen unprecedented violent attacks on Phoenix police officers.

Month after month, more and more of our brothers and sisters make the decision to retire and move on. Achieving the finish line sometimes seems like a lofty goal. Congratulations to those who get there. What is interesting and sends a message, not only to Department management but also to City management, is that a lot of folks are making the decision to retire before entering or completing DROP, leaving in some instances hundreds of thousands of dollars on the table. The last figure I heard was that Phoenix police officers are averaging two and a half years of DROP before pulling the plug. In addition, we have folks resigning and either lateralling to other police departments or leaving the profession altogether. The conversation always seems to revolve around recruitment, but when you have 20-plus-year officers and detectives leaving, that institutional knowledge and experience is lost forever. Some reflection by those at the highest levels of the City and Department management needs to happen immediately to prevent the ongoing exodus of senior officers.

In these past 12 or so months, we have seen unprecedented violent attacks on Phoenix police officers. At no time in my 28-year career have I witnessed anything like it. To date, nine officers/detectives have been shot and another nine injured by shrapnel during the same incidents where our people were shot. Thanks to the grace of God and the outstanding reactions by these officers, we have not had anyone killed. In each of those incidents, our officers displayed an unwavering commitment and extreme courage while attempting to protect innocent citizens.

Nationwide, the attacks on police continue to grow. Ambush attacks seem to be the flavor of the day for the cowardly criminals. We need to be aware of everyone and everything as we go about our daily work. Take nothing for granted.

We have a new Chief who has come to us from Baltimore. I have met with Chief Sullivan several times, and each time my respect for him has grown. I did not like the exclusionary process that brought him here, but I do believe he will guide this ship, hopefully, back to the glory our Department once enjoyed. For those of you who have not yet met him, he is not pretentious or egotistical. What you see is what you get. The FOP president back in Baltimore all but told me the same thing before he started with us. I am hopeful that his leadership will be nothing but beneficial for us.

As this year ends, I am looking forward to 2023. While we are bound to encounter some rough patches, I am confident the proud members of the Phoenix Police Department will continue to be the example for the rest of the nation. From acts of heroism we have yet to see to the everyday examples of compassion provided to our citizens in need, the courageous men and women who serve this community are dedicated professionals who seek out some of the most evil people in the world to put them in prison where they belong.

Remember — take care of each other, don’t advise, and if you have any questions, I can be reached at the PLEA office or at dkriplean@azplea.com. 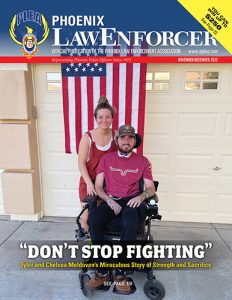