Last year’s hugely attended picnic, coupled with the wildly successful Facebook group for retired Phoenix police officers, proves that retired Phoenix officers want to reconnect. Most are still active, many own businesses, and whether in ill health or wonderful health, they want to reach out to one another.

A long time ago, we had a publication mailed to our homes called 10-7. With budget cuts, etc., this evolved into an electronic publication. To her credit, retired Lieutenant Gail Kavanagh, as a volunteer, worked hard to make this publication successful. However, the retiree circulation became smaller and smaller over the years. I recently took a survey on the Association of Retired Phoenix Officers’ website, as well as the Facebook group, and learned a surprisingly large number of retirees had never heard of the 10-7. Many others had heard of it but never received it. Many retirees whom I have spoken with have been led to believe that once you have retired and walked out the doors of 620 West Washington Street, it is as if your sword is broken, and you’re no longer welcome in the castle.

On June 4, 2014, I met with representatives of the Department. I was astonished when I mentioned the history of the 10-7 that, like many retirees, neither of the representatives had ever heard of it. One of the suggestions I had, which seemed to meet with some enthusiasm, was a request that retirees be given one or two pages monthly in the widely distributed, weekly Phoenix Police Department newsletter. The purpose would be to let retirees know of pension benefit changes, health insurance changes, retiree events, and to notify which retirees have fallen ill and would like contact with old partners and friends. I was told this would be taken under advisement and I would be notified. Six weeks later, I was notified that the Department had decided it would not be relevant to add a page once a month dedicated to retirees. I was shocked. I asked repeatedly, “Retirees are not relevant to the Department?” I was informed the Department newsletter has information for current officers. Yes, I agree that’s true, but does that somehow mean that things that affect retirees are not important to current officers? I would like to believe that all current officers hope to one day be retired officers.

Two days after I was told “retirees are not relevant,” I attended a committee meeting with Sharon Knutson-Felix, the executive director of the 100 Club, and several other committee members, including a Phoenix Fire Department representative. It has long been known that firefighters “take care of their own” whether the firefighter is active or retired. I asked the firefighter for his opinion on the difference between fire retirees and police retirees. His statement was simple and true: “Fire cares for their own and Phoenix police eat their own.” I agree with him. The nature of our job leads to negative encounters that oftentimes lead to discipline, or at least uncomfortable investigations, much more so than with fire. Fire cares for their employees from the top down.

Had we been killed in the line of duty, we would have been hailed as heroes, and rightly so, by all levels of the Department, City and the state. That could have been any one of us, because we all were willing to make the ultimate sacrifice. Instead, we were lucky enough to make retirement, but that does not mean we left unscathed. In fact, I would venture a guess that almost all of us carry scars, figuratively or literally, from our 20-plus years as Phoenix police officers. It is impossible to see the things we saw and do the things we had to do without leaving scars.

For the 20-plus years of sacrifice you made to help your community, your city and your state become a better place, I am here to tell you that you were and are very relevant! I hope the Department will see it that way, too, because we’re all in this together. 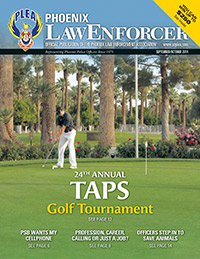