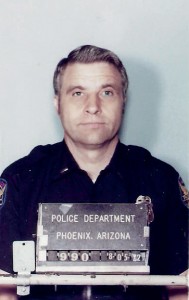 Richard White, #990, retired as a lieutenant in 1985 after serving 22 years on the Phoenix Police Department.

After moving to Phoenix in February 1961 from a small farming community in west central Illinois, Richard applied for a position with the Phoenix Police in October 1962. He was able to pass the physical and written testing, and was one of six candidates who passed the oral interview to be accepted. However, Richard was overweight and had until January 6, 1963, to meet the requirement. He enjoyed a Thanksgiving dinner of grapefruit, made the goal and started the Academy. At the time, it was situated at its current location but consisted of an adobe building and a metal building next to the range master’s house in front of the range.

The Academy lasted eight weeks, and each Friday recruits rode along with a patrol officer on Shift 1 or 2. Their recruit uniform was khakis and a big plastic enclosed name tag with “Recruit Officer” in full view — “You sure felt the public eyes on you,” Richard says. He was assigned to 800 and the day shift officer introduced him to the morgue, as they had evidence pickup duty at the old County Hospital, located at South 35th Avenue and West Durango Street. After entering through the front door and seeing an autopsy in progress, he managed to not lose it, but was told they could have used the back door to get the evidence to transport to the lab, which was located in Downtown Phoenix.

Thirteen recruits made it through the Academy, and Richard believes that five made it to retirement. Back then, the Department was on rotating shifts, changing every three months. His training officer was Ralph Chapman, who has since passed away, and they mostly rode the wagon. On May 5, 1963, they stopped a subject at South 10th Avenue and West Buckeye Road in reference to a homicide in the area. As it turned out, the subject was not the suspect, but an escapee from the State Hospital at North 24th Street and East Van Buren Street, who was not yet reported. He pulled a revolver from his waist and shot Ralph as he came around the wagon. Richard fled to the back as the suspect fired at him. He avoided injury, but the suspect was hit by their shots and died at the hospital. Ralph eventually recovered from a leg wound. Richard believes that the grace of God was with them that night, which was probably the worst moment of his career.

Richard was able to solo shortly after the incident and enjoyed the job to the fullest. He never had a day he didn’t want to go to work, and although he had assignments in many areas, he never worked Vice, Narcotics or Solo Motors. 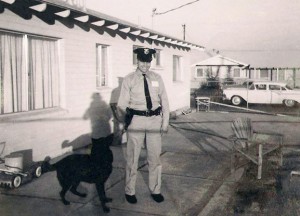 In 1963, the Phoenix Police Department was just getting its first air-conditioned patrol cars and you had to use the pay phones for most of your business, including record checks and other information. You quickly learned to call the city operator to place your call so you could get the dime back; otherwise, it was costly and came out of your $330-a-month salary. There were no portable radios or computers, and only the teletype for out-of-area inquiry. Interestingly enough, officers were able to do so much without the modern conveniences of cellphones, portable radios and Mobile Data Computers. Richard remembers getting a call from a dispatcher to see if he still had contact with a car he ran the shift before, as it was wanted in connection with a homicide from another state. As luck would have it, he found it in the same area and was able to arrest the suspect at a local flophouse.

Officers’ Code 7 (meal break) was 20 minutes, and they had to have a phone number to check off if they needed to be contacted. Officers and dispatchers both got to know the numbers. Shift 3 only had a few places to eat at, and with the rule that only one unit at a time could eat, it was hard to get in.

Richard enjoyed every assignment, but if he had to pick his favorite, his two times as a sergeant in the Special Assignments Unit (SAU, formerly known as SEU) would have to be the choice. Many were a learning experience and benefited him in all areas. He worked for a great bunch of supervisors and had a lot of great cops work under his supervision. There are many stories to be told and accomplishments to acknowledge, but the most satisfying ones were from good hard police work, such as finding a suspect vehicle with the bullet holes as broadcast, which led to booking the bad guy. That happened many times during Richard’s career, and he remembers most of them.

During his career, Richard saw the Phoenix Police Department grow, as well as becoming modernized with the computer age, going from no portable radios to many forms of communications. As he was leaving, we went on Computer Aided Dispatch (CAD) and had the Modats (Mobile Data Terminals) installed in patrol cars. Richard was able to work on forming District Nine under Major Edens and saw the entire project become a reality, including the building and reorganizing the entire Patrol Bureau.

Richard retired on July 28, 1985, to take a job with Bullhead City, a newly incorporated city in Mohave County. His good friend from the Maricopa County Sheriff’s Office, Tom Ennis, was the new police chief and had to form a complete police department by October 1, 1985. Retired Sergeant Fred Stuart was also a part of the formation, which included all facets, including hiring a total of 31 officers. They made the deadline, and to this day it is still a growing department.

Richard has had numerous jobs since leaving Bullhead City in mid-1987. He moved to Tucson in 1995 to be near his daughter and resides in Oro Valley, where he is a volunteer. His last job was a part-time position at Tucson City Traffic Court, which lasted over four years. In September 2000, Richard was blessed with a granddaughter and fully retired to become her babysitter, which he says turned out to be the best job he ever had. His granddaughter started high school this year, and he still enjoys helping her along and watching her participate in all of her activities.

Richard is always proud to say he retired from the Phoenix Police Department, and believes it is still one of the finest. 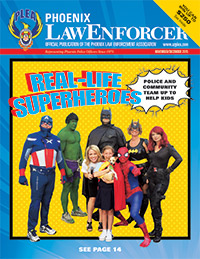