Editor’s Note: Retirees play an important role in our PLEA family, so we’ve decided to include a “Where Are They Now?” feature to the Retirees’ page showcasing retired officers and their previous assignments and post-career accomplishments.

Ben was born in and raised on Chicago’s South Side. After serving two years in the United States Army at Fort Bragg, North Carolina, and returning to Chicago’s terrible winter storms, he contacted Sergeant Lowell Hicks in Phoenix regarding a position with the Phoenix Police Department. He had enjoyed Phoenix as a young kid driving to California on a family vacation in 1947.

Ben started the Academy in 1960 with some great classmates, including Hugh Ennis, Larry Sheets, Milo Kaufman and a few other recruits. On his first day on the job in the field, with Dan Barker as his training officer, after briefing they drove to Rainbow Donuts on East McDowell Road; he was finally a real cop! He next spent five years in patrol working East Phoenix and transferred to Narcotics in January 1965, then to the old General Investigations Bureau in June 1965. Ben was promoted to sergeant in April 1970 and kept that rank until his retirement in 1982.

Ben enjoyed working with some great guys and gals and felt a special accomplishment in investigating and successfully prosecuting individuals in rape and molestation cases. His saddest day was the loss of Motor Officer Al Blum in December 1970. Ben knew Al from working off-duty jobs together and enjoyed Al’s stories about when he worked in Kansas City, Missouri. The week prior to Al’s death, Ben’s youngest daughter had been begging him to take her to the Busy Bee, a cop’s lunch counter in the downtown area, because she had heard so much about it! Well, he took her there, and Al happened to be there eating. Ben introduced Al to his daughter and Al talked to her, making her feel great. What a guy, and what a terrible loss.

After leaving the Department on January 31, 1982, Ben and several other Phoenix police officers followed retired Chief Doug Nelson to join the security program at the new Palo Verde nuclear plant. Ben served as a captain and shift supervisor at the startup of the plant and retired from Palo Verde in May 1992.

On May 18, 1992, Ben took the position of Mohave County probation officer in Bullhead City, Arizona. He began as a deputy I, handling adult caseloads from the superior court and once again enjoying the camaraderie of the other deputies #8010 he worked with. While Ben was able to help some of his probationers, others just couldn’t overcome their drug and alcohol addictions. He has since met several of his former probationers in the Bullhead City area who have thanked him for helping them get straight. Ben said it was extremely heartwarming to be able to help another human being, just as it was when he was a cop who helped a victim get some closure. Ben retired from Mohave County as a deputy II on April 4, 2003.

In 2003, Ben was asked to become a member of the Clark County, Nevada, Coroner’s Office in Las Vegas. He held the position of investigator and was responsible for handling deaths in the Laughlin and Searchlight areas, as well as the vast desert in between. As in the past, he once again worked with some great people and a good boss, Mike Murphy. However, by 2008, Ben was starting to get tired of those late night and early morning phone calls and finally retired, sort of, for good.

However, since 2002, Ben has been a member of the Volunteer Homeland Reserve Unit, started by retired New York Police Department Officer Ted Farces. This unit of retired law enforcement and military personnel was created after 9/11 by Ted to assist police departments in the Arizona, Nevada and California tri-state area in the event of another 9/11-type attack. Currently, it assists agencies with events that require additional (unpaid) police services, drawing on the knowledge and experience of years of police work from departments throughout the country, including the Las Vegas Metro, Bullhead City, North Las Vegas and Fort Mohave Indian Police Departments. Ben says it is very interesting to hear cop stories from the different jurisdictions. 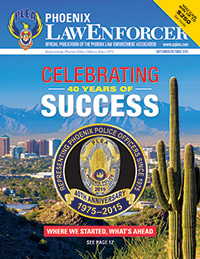