Outside of work, I make no bones about the fact that I am a proud American, a second-generation descendant of immigrants who stands for the national anthem and places my right hand over my heart for the Pledge of Allegiance. Within a year of moving to a new city in a new state, I had a life-changing military deployment, immediately followed by a temporary duty assignment where I worked alongside and provided undercover detectives support in narcotics investigations. Those were part of a chain of events that led to my decision to leave a skilled trade in the private sector to pursue a career in law enforcement. This provided me with an opportunity to give back to and continue to serve my new home. My Army Oath of Enlistment and my police oath have similar clauses, including “protecting and defending the Constitution of the United States against all enemies, foreign and domestic,” which I firmly believe in to this day.

It’s no secret that PLEA has butted heads with City Councilmember Carlos Garcia, who represents District 8. You should know him by now. He’s an anti-police and open borders activist and director of Puente Arizona, who was arrested during the anti-SB 1070 protests several years ago and hijacked the City Council meeting in 2017 after the Trump rally. In 2019, he campaigned, ran for and won the current City Council seat he holds.

At the City Council meeting PLEA attended on June 19, 2019, I immediately noticed that Garcia didn’t place his hand over his heart for the Pledge of Allegiance and was also wearing a T-shirt with “End Police Brutality” on the front. A photo of him seated at the dais quickly went viral on social media and his history as an anti-rule-of-law activist became more evident in the weeks that followed, coming on the heels of the “shoplifting” and “Facebook” investigations. He demanded the involved officers be immediately terminated despite their due process rights, and began pushing the issue of having an independent civilian review board with the power to subpoena witnesses and terminate officers, despite a proven current process that has had civilians integrated into it for many years.

Six months later, a #8255 body-worn camera video from a traffic stop in downtown Phoenix involving Garcia conducted by Arizona State University police surfaced on local television channels and websites. True to his colors, Garcia’s arrogance and blatant disregard for the law were clearly evident. First, he tried to argue with and question the officers, who were extremely professional and polite, about whether they had jurisdiction and then made it clear that he was going to see how to “get you guys out of here.” Based on these statements, he clearly doesn’t understand the concept of Arizona peace officer jurisdiction or the city’s mutual aid policy. He then made an issue about being asked for his Social Security number, which we as police officers normally do as part of a records check to confirm an individual’s identity. He later tried to explain to a reporter that he was “concerned for other people in the community who now have another police agency to worry about.” Garcia should know that safety and security of the community is one of the primary functions of government. In a city where an understaffed police department has been doing more with less for several years now, one would think a “leader” would appreciate having the extra assistance. Stats from 2018 available on ASU’s website show almost 11,600 students enrolled at its Downtown Phoenix campus. That’s a huge population increase, regardless of whether they commute or live on campus, and Phoenix Police Department patrol resources, including our Downtown Operations Unit, are already stretched thin in this rapidly growing part of the city.

On January 25, 2020, Garcia authored an op-ed piece that was published in the Arizona Republic, where he justified his reason for wearing the T-shirt. He wrote, “However, what I will not get used to or be complacent about is police brutality, regardless of being made fun of, critiqued or threatened in the form of hundreds of hate messages we receive weekly at my city council office. I will continue to demand police accountability and transparency.” He continues, “The impunity of the Phoenix Police Department has led us to become the deadliest police forces [sic] in the country,” and it “is not an opinion” but “based on empirical data of shootings, the infamous incidents caught on video and the millions of taxpayer dollars we have paid in lawsuit settlements.” After discussing the need to create an “independent investigative, community-driven civilian review board that assures the people of Phoenix that we care about fixing the problem,” he goes on to say, “It would give a clearer avenue for the survivors of police brutality to report it and an open process for how our city government will hold the police department accountable.”

Like most anti-police activists, Garcia mentions “police brutality” in his op-ed, along with “police violence,” which has been pontificated about ad nauseum at City Council meetings by Poder in Action, another activist group. “Police brutality” isn’t even listed in Black’s Law Dictionary, considered by most attorneys to be the Merriam-Webster of law reference books. It is largely a made-up term, used to refer to excessive force being used to effect an arrest. As a 25-year veteran of the Phoenix Police Department, I don’t believe we have an issue with “police brutality” in our city. I believe we have an issue with uninformed individuals like Garcia and the groups he is affiliated with.

U.S. constitutional case law, Arizona Revised Statutes and Phoenix Police Department policy allow force, up to and including deadly force, to be legally used by officers in the performance of their duties. Cases like Tennessee v. Garner and Graham v. Connor are the cornerstone cases used to judge police use of force. In Graham v. Connor, U.S. Supreme Court Justice William Rehnquist stated in the court’s ruling, “The ‘reasonableness’ of a particular use of force must be judged from the perspective of a reasonable officer on the scene, rather than with the 20/20 vision of hindsight. The calculus of reasonableness must embody allowance for the fact that police officers are often forced to make split-second judgments — in circumstances that are tense, uncertain and rapidly evolving —about the amount of force that is necessary in a particular situation. The test of reasonableness is not capable of precise definition or mechanical application.” Having said that, using force to effect an arrest of an individual, especially someone high on drugs or determined not to go back to prison who is actively resisting arrest, never looks good. When officers confront violent, out-of-control suspects who put others at risk of serious injury or death, we must match or exceed their force levels to gain control of them. Some of the techniques that we are trained to use could very well be perceived as violence, but they are legally justified.

Proponents of the “police brutality” myth often like to say we take advantage of and use the use-of-force laws we operate under to legitimize our actions. Garcia’s comments referring to us as the “deadliest police force in the country” are a direct reference to a record 44 officer-involved shootings in 2018, where 22 criminal suspects died. Thirty-five shootings involved suspects with guns, including incidents where the suspect shot civilians or pointed a firearm at and/or shot at our officers, four suspects were armed with knives and one was armed with a dangerous instrument. He fails to accept the fact those shootings were all legally justified under #9889 Arizona Revised Statute 13-901, which is why none of our officers were indicted for their actions. He also fails to understand or accept that no officer ever wants or looks forward to using deadly force to resolve an incident, and for those who do, it is a decision they will live with for the rest of their lives. Sadly, a consequence of resorting to deadly force is officers who have suffered mentally and emotionally and have taken their own lives.

As a public servant, I must abide by the law and Department and City rules and regulations, including those governing what I can say and do, on and off duty. (Can you say, “Facebook investigation”?) Policy dictates what I can wear during the course of my duties, and if I were still in patrol, I would have to follow policy regarding operation of Department vehicles and what items I’m allowed to have on my uniform. While it’s bad enough that several years ago I got a talking-to from a now-retired assistant chief about the 9/11 memorial pin I had on my uniform while attending an award ceremony, I can’t place a thin blue line flag decal on any City-issued equipment, including a marked patrol vehicle, or wear one on my uniform. I’m not allowed to speak in a negative manner about the City or the Department, and I must conduct myself in a professional manner at all times. Violating any of these policies may potentially lead to a PSB investigation, followed by a trip to the Disciplinary Review Board.

While Garcia is an elected official, he is also a public servant, but he bends the rules to suit his agenda. His focus should be on serving all residents of Phoenix, which includes a number of the rank-and-file Phoenix police officers PLEA represents — not a select demographic or what I would call a special interest group, which he clearly lays out in his own words. Imagine if the men and women of the Phoenix Police Department did that?

Slow down, wear your vest, stop advising on calls and stay safe! 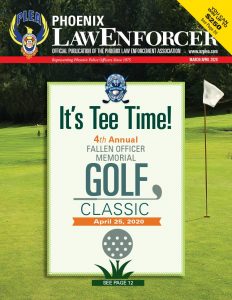