I am going to try to keep this short and to the point (if possible). Recent events regarding critical incidents involving Phoenix police officers (our members) have sparked me to write this article. Over the past several years, the leadership of the Phoenix Police Department and PLEA have worked together to come up with a very good model to use when officers are involved in a critical incident, like an officer-involved shooting, in-custody death and some others. This has evolved from a practice that was not in the best interest of the involved officer’s well-being.

In the past, officers involved in a critical incident would provide a criminal interview either to homicide detectives or other criminal investigators taking disposition on the incident. This is a voluntary interview the officers provide regarding their justification of use of force or deadly force as they relate to Arizona’s laws. Once that interview was concluded, the officers were required to stay on scene and provide an administrative interview to Professional Standards Bureau (PSB) investigators, commonly known as Internal Affairs, regarding Phoenix Police Department policy administrative work rules. This made for a very long and stressful day for officers defending their lives and the lives of others. Sometimes these days lasted as long as 18 hours. Obviously sleep-deprived and not in a good state of mind to conduct these interviews, officers were literally falling asleep waiting for interviews to happen. They would be separated and confined in a patrol vehicle with a supervisor and had no other options while attempting to mentally deal with stress, confusion and worry. It was clear that things needed to change.

There are so many changes happening to this Department, and many are coming from Councilmember Garcia’s camp.

After several years of negotiations, PLEA and Phoenix police management came to an understanding that the PSB (administrative) interview would be delayed about two days to allow the involved officers to recover from the incident and provide a competent interview. This is not just from PLEA pulling a number out of the air and saying, “Let’s try this!” This type of delay with the interview is based on extensive research conducted by the Force Science Institute. PLEA believes in this science, and so does the Department. Instructors assigned to our training bureau at the Phoenix Regional Police Academy also attend classes and implement training tactics with Force Science research in mind. There are published studies showing that an officer getting at least one sleep cycle after being involved in a critical incident will have a better recollection of the event compared to the officer who is sleep-deprived, stressed and tired when providing their administrative interview. This is true; it is best for the well-being of the officer, who will provide the best interview. Since implemented, the process has been working flawlessly for the past few years. So, what has changed?

Enter Councilmember Carlos Garcia. He has frightened the leadership of the Phoenix Police Department to the point that the well-being of the officers involved in a critical incident is no longer the most important issue to their employer, the City of Phoenix.  We are going back to the days of old, to a time before science told us — and showed us — that the best practice is a day or two of rest prior to an administrative interview. This has created a time when officers will once again have to be awake for 15–18 hours to provide that interview.

How do we know this? It happened on Tuesday, August 4, after an in-custody death in the area of 51st Avenue and Indian School Road. Officers involved in the #9910 incident were released from the scene at 10:00 p.m. after being at work since 6:00 a.m. and were expected to return to work for their following shift the next morning. This is ridiculous! What is the reason for this? Is it Councilmember Garcia? Is Phoenix Police Department management afraid he might hold a press conference and provide false facts about an incident again? What you need to remember is that officers have already provided a voluntary interview with criminal investigators at the scene, so the Department already knows what transpired, and they have a full understanding of what happened during the incident.

So, why is the wellness of the involved officer not being considered? Detectives assigned to the Employee Assistance Unit (EAU), who are the ones looking out for the wellness of our officers, disagree with this practice of holding officers at the scene and not providing them with an adequate sleep cycle to help with their stress and memory recollection. I want you to know what is happening with the Phoenix Police Department and why changes are happening that do not take your wellness into consideration.

There are so many changes happening to this Department, and many are coming from Councilmember Garcia’s camp. If you ask me, it seems like Councilmember Carlos Garcia is the Chief of our Department. He sure has them scared. 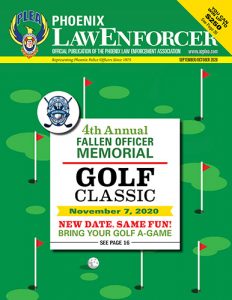