With a tumultuous 2020 finally behind us, we are entering the unknown of 2021 and what will be my last three months as a Phoenix police officer. In my 26 years of what has been an amazing career, I am still dumbfounded as to what has become of a proud profession because of politicians and activists. I firmly believe that it was former president, Barack Obama, who started the “War on Cops” after he interjected himself in the arrest of Henry William Gates, which occurred on July 16, 2009, claiming “the cops acted stupidly” without knowing all the facts of what led up to the arrest. When the leader of the most powerful nation in the world makes a preposterous statement like this, it is a green light for all to follow.

Councilmember Garcia’s anti-rule of law and anti-police stance has been clear since his activist days with Puente.

Five years later, on Obama’s watch, we had the infamous Michael Brown incident in Ferguson, leading to the “Hands up! Don’t shoot!” myth perpetuated by Black Lives Matter and which has become the clarion call of police reform activists. Two years later, on July 7, 2016, five Dallas police officers were shot and killed with nine more injured, and 10 days later, two Baton Rouge police officers and a Baton Rouge deputy sheriff were killed, and three other officers were wounded in ambush attacks attributed to the anti-police rhetoric spewed by Black Lives Matter. That rhetoric continued, and the summer of 2020 was one of protests and riots sparked by the death of George Floyd while in the custody of Minneapolis, Minnesota, police and other high-profile cases, including Breonna Taylor and Jacob Blake. The key element I have seen in these cases has been judgment of the involved officers in a trial by media long before all the facts of the investigations are known.

Phoenix isn’t immune to the rhetoric, and while we’ve had several high-profile incidents of our own, a lot of the rhetoric comes from our elected officials. Mayor Gallego and Councilmember Carlos Garcia have been embraced and supported by those involved with the “defund the police” movement. Recently, this all came to a head after an allegation that a Phoenix police officer made a “credible threat” against the mayor, and media outlets ran with the story. Never one to let a crisis go to waste, Garcia was the star of the show in one media account of the incident, claiming that PLEA’s Facebook posts “make the issues personal.” Councilmember Garcia’s anti-rule of law and anti-police stance has been clear since his activist days with Puente. He is the one who hijacked the City Council meeting after the 2017 Trump rally, then shortly after he was elected to the Council, his interaction with two ASU police officers was memorialized on body-worn camera footage after they stopped him for suspended plates in Downtown in 2019.

In July 2020, Garcia made blatantly false statements regarding the July 4 officer-involved shooting with James Garcia, and the false narrative he and Poder in Action pushed about how PLEA decides who is selected for school resource officer positions was promptly shut down by Assistant Chief Mike Kurtenbach during a City Council meeting during the summer of 2020. The look of surprise on his face was of a Pow! Zap! comic book cloud. When so-called “leaders” attack our members and the law enforcement profession without merit, we’re going to call them out on it and let everyone know where they stand. It’s ironic that Councilmember Garcia reminds me of another guy with the same last name with a similar agenda: radically changing the Phoenix Police Department due to issues that didn’t really exist, but were fabricated to make it look like there were problems that needed fixing, and he was the only one who had the power and ability to do so. As was the case with the other Garcia, standing up for and defending our members are far from personal; it’s business.

The same article laid out the conflict between Mayor Gallego and PLEA. In 2014, while she was a City Council member, during a meeting regarding approval of our contract, she made a motion to increase our pay, then promptly voted against her own motion, setting the tone for future behavior. In 2017, PLEA met with the mayor and every City Council member to discuss staffing and manpower concerns. At the time, the mayor was a Council member, and although receptive to our concerns, she didn’t respond with any clear or defined commitment to resolve those issues. Mayor Gallego has now been in office for almost two years, and she has yet to show any commitment or support to Phoenix police officers. Last February 24, after proposing an “auditor model” of civilian oversight, as with our 2014–2016 contract, she did a 180-degree turn and supported Councilmember Garcia’s “Plan B,” which PLEA knew would be bad for the City and our members. As mentioned above, in late May 2020, violent protests broke out in Downtown Phoenix and carried into the first week of June. On May 30, during a night of protesting, several Phoenix Police Department Tahoes had their windshields broken and tires slashed. Windows on the Sandra Day O’Connor Courthouse and several businesses were broken out. On June 2, the mayor posted on her Facebook page that she appreciated the work and commitment to the community shown by Neighborhood Services and Public Works after spending several days cleaning up the damage.  However, there was absolutely no acknowledgment or mention of gratitude to the hundreds of Phoenix police officers who had been out in the triple-digit heat in full crowd control gear for nearly a week preventing additional damage, as well as protecting those who were protesting. On June 9, she posted on Facebook that City Hall was lit with crimson and gold to honor George Floyd! On June 29, PLEA President Britt London sent a letter to the mayor and City Council to stand with Phoenix police officers and oppose the “defund the police” movement. As this issue goes to print, we have yet to hear her, Garcia, Laura Pastor or Betty Guardado voice any sort of support for Phoenix police officers.

Social media works both ways, and PLEA has no control over what our supporters and followers say about Councilmember Garcia or the mayor, but maybe Garcia needs to look in the mirror and see why he gets the influx of angry calls and emails, or the alleged threatening comments via phone, email and social media. PLEA has been the recipient of similar actions after calling out the groups Councilmember Garcia aligns with on social media about the outlandish claims and outright lies they have made and told about PLEA and our mission. PLEA has never been opposed to accountability, and as mentioned ad nauseum over the years, we have walked plenty of Phoenix police officers out the door and helped them surrender their AZ POST certification when their conduct was egregious enough to warrant it. All we’ve ever asked for is that due process run its course and that the disciplinary process be fair, unlike the radical changes Garcia has tried to push through while trying to implement the new Office of Accountability and Transparency. PLEA knows through polling that the majority of Phoenix voters support the Phoenix Police Department. This is totally contrary to the small group, which has repeatedly shown up at City Council meetings behaving like spoiled, petulant children who don’t get their way. Instead of looking out for the best interests of the majority of Phoenix residents, we have a mayor and members of the City Council who have chosen to cater to a few squeaky wheels. I believe that because of PLEA’s efforts on social media, the silent majority who support police and law and order are finally becoming more vocal.

Absent law and order, there is chaos, and those calling for defunding and outright eliminating police departments are finding out how quickly the tide can turn against them. We’ve seen accounts of elected leaders aligned with the “defund the police” movement in some cities hire private security or utilize the very law enforcement assets they condemn in order to protect them because of concerns about their safety. In many of those same cities, residents of minority and low-income neighborhoods are asking for more police officers because they are the people who suffer when criminals are allowed to prey on them because of a decreased police presence. As 2020 drew to a close, while the city continued to grow in population, Phoenix saw an increase in violent crimes, including homicides. This occurred as the Phoenix Police Department continued to lose personnel through attrition while failing to meet recruiting goals for the third straight year. Despite the anti-police rhetoric and lack of support from elected leaders and community members, the men and women of the Phoenix Police Department will continue to do the job they willingly took on. On that same note, I, along with the rest of the PLEA Board, will continue to stand up and defend our members when they are wronged. 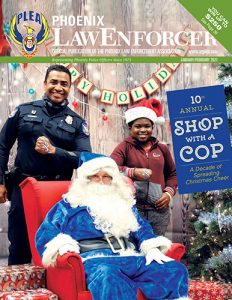